Toadsworth (Japanese: キノじい Kinojii) is a fictional recurring character seen in the Super Mario series as an elderly Toad. He often fills the role of the original Toad, being Princess Peach's loyal and caring attendant and a companion to Mario and Luigi. Toadsworth debuted in the GameCube videogame Super Mario Sunshine. He is married to Toad Mary, later revealed is a partner of Lord Fawful.

Toadsworth uses his powers to sense the Eternal Instruments in the Mushroom Kingdom. He knows the legend of the Heavenly Orchestra. He also knows information about many other myths and legends as well.

Toadsworth is a player on the Peach Royals team on the multiplayer Wii sports game Mario Rugby League. He is one of only two males on the team, however he is one of the weaker characters. He is the most skilled character in the game, he can easily score a try however his catching is not always the best. He can release spores to prevent tackling.

In Mario Singalong Legends! to unlock him you must "Papa Don't Preach" by Madonna and "Son Of A Preacher Man" by Dusty Springfield with Toad at least once.

Toadsworth has been in two Super Smash Bros. games to date.

Toadsworth is the main protagonist in Mushroom Kingdom War I: The Story. But his younger self is only playable.

He appears in New Super Mario Sunshine along with the new elderly toad: Madame Toad.

In the game Lights, Camera, Mario!, He is a Sub-Director

In Super Mario Sunshine III: Delfino Peril, he is seen in the beggining, but it is unknown yet if he is captured with the rest of the Toads.

He appears in this game as Boss.

Toadsworth appears in this game in charge of the Brown Toad Houses. You get a free rare item each time you go in there. It's random so if one regenerates and that one earlier had a Super Star you can get a different item.

Toadsworth is a playable character in Mario Super Sluggers HD for the Nintendo Switch. He has 10 palette swaps.

Toadsworth appears as a 3 star spirit 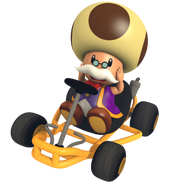