Toadette is the female counterpart to Toad. She appears to act very childish and energetic, much like her male counterpart. She also is Toad's younger sister. She made her Mario Kart and Super Mario debut in Mario Kart Double Dash!! (Nintendo 2003)

Toadette is a player on the Peach Royals team on the multiplayer Wii sports game Mario Rugby League. She is a skilled character, her speed is higher than Peach but her strength is lower. She has the ability to shoot pink spores to prevent tackling.

In Luigi & Waluigi Toadette is given the Dragon Coin, a powerful coin that allows the Dragon transformation. But when using it she flies to Boo Island and is unable to escape. She must be rescued by Luigi and Waluigi.

Toadette appears in Mario Lacrosse as an unlockable character.

Toadette is unlocked in the upcoming Steli Entertainment Hybrid Delta game Mario Kart: Delta. She is a lightweight character.

In this game, Toadette is a playable character. She has not, much of an other role in it. Without her, the plot will not change.

Toadette appears in Super Mario Bros. V as the host of the Dream House which is what you have to use for features on Nintendo Network.

Toadette makes a brief appearance during the prologue when she rides in to Mario's House on Yoshi.

Toadette plays a major role in the game; she's been presumably kidnapped by Bowser, through it later ends up someone else did, so Toad must save her.

Toadette is a playable character in TTtS: YI. She is more or less a support character in the game, and when she uses a powerup the effect of that powerup is boosted. Her special ability is the Poison Mushroom.

In this crossover game, Toadette is the main protagonist, alongside Captain Toad. She is the trainer who have to start her journey, making friends, catching and trainning Pokémon, defeating the Gym Leaders, etc. Her story starts in Toad Town and she lives in Princess Peach's Castle.

Toadette appears as a damsel in distress in Super Mario Moose. In the game, she is kidnapped by Pom Pom and held hostage in World Pom Pom, where Mario and co. must go to save her.

Toadette was considered to be a playable character, but the idea was scrapped.

Toadette appears in again in Super Mario Moose Deluxe, with the same role spas she had in the previous game.

Toadette appears in a surprise antagonist role in Super Speedstar RPG, with the first chapter seeing her as the caretaker of the Mushroom Kingdom while Peach is gone, but immediately taking over in her absence, proclaiming herself as the new princess. When the group returns, she kicks them out and the group is forced to take the kingdom back through force. Knowing their power, Toadette heads down to the basement where the legendary Wrath Toads are locked away and sets them free to protect herself. When they are defeated, Toadette ends up having to fight the group herself and loses, being usurped from the throne and imprisoned.

Toadette reappears in Mario & Luigi: Sage Quest as an non-playable character, her role being smaller than it was in Mario & Luigi: Paper Jam. Toadette can be found in her own Toad House designed after her mushroom cap in Toad Town, where she references the events of the mentioned game (even having the Papercrafts from the game in her house as well) and mentions her time in the Toad Brigade as an archivist. Toadette looks at the player's records in this game, awarding items based on their progress with Blocks, Beans, the number of battles won, the number of enemies defeated, the number of Excellent attacks done and the number of battles fled from. She can also scan compatible amiibos for stamps.

Toadette appears as an unlockable playable character. She is found in Mount Henhar and is unlocked by beating her in a skiing minigame. Though she is not required immediately, she is required in other places. She is the only person who can use the Super Crown item, which turns her into Peachette.

Toadette appears as a playable character in Mario Tennis: Heroes Vs Villains. She is a technical type having great accuracy but easy to knock back. Her zone shots are Front Flip (Toadette does a Front Flip forwards or turns around and does it that way) and Back Hand Spring (Toadette does a back hand spring to the left or right side of the court). Toadette’s Special Shot is Double Cherry Thro in which she uses a Double Cherry to make a copy of herself, the copy then throws her in the air so she can hit the ball from high up. Toadette’s villain is Fly Guy and her Hero Special Shot is Toadette Papercraft Attack where she quickly builds a giant papercraft version of herself that she uses to hit Fly Guy. If Fly Guy uses his Hero Special Shot Cancel Toadette’s Papercraft build will fall after she finishes building it. 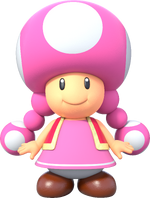 Toadette Mii
Add a photo to this gallery

Retrieved from "https://fantendo.fandom.com/wiki/Toadette?oldid=3099571"
Community content is available under CC-BY-SA unless otherwise noted.