“Thank you Mario, but our princess is in another castle.”
— Toad, Super Mario Bros. 2010

Toad is Peach's long-time assistant and is the name of a single character, and an entire Toad race, similar to Yoshi. His role is sometimes taken by Toadsworth instead. He often shows up at Mario's house and tells him that the Princess has been kidnapped. In Toad: Agent of the FBI, he gains a deeper voice and is revealed to be an agent of the Fungus Bureau of Investigation. He has a best friend named Toadette.

For a long time, little was known regarding Toad's past. This was finally revealed in Yoshi's Island 2. While on Yoshi's Island with Baby Mario, Baby Wario, and a few others, Toad witnessed the kidnapping of Baby Peach by Kamek. Toad then got kidnapped himself(along with everyone but Baby Mario) and was kept hidden inside a level, where Baby Mario and Baby Luigi later found him. Then he hopped on a Rex and went to save Baby Peach. This is likely why he dislikes Kamek.

In conflict, he has an entirely different move set.

In Channel, Toad is one of the eight downloadable characters. After downloading him, you also get the Toad's Factory stage.

Toad has been announced to be a default newcomer in Super Smash Bros. Brutal Duel. His attacks mainly use the various power-ups from New. Super Mario Bros. Wii and Super Mario 3D World!

Toad is one of the racers in Super Mario Hover Race.

New Super Mario Bros U 2: Return to the Mushroom World

In the stage, Toad's Factory (from Mario Kart Wii) Toad makes a cameo.

In the real-time strategy game Smash Tactics, Toad is the worker unit for the Mushroom Kingdom team, i.e., he collects coins, harvests food and builds structures. Toads are created from the Castle.

Toad will be playable in Mario Party Infinite. Not much else is known, but he has been seen standing behind Peach in a screenshot. What this means is unknown. Toad will also be a playable character in Nintendo Party. Not much is known about his either, however.

Toad is a playable character in Super Mario Legends. He has to be unlocked by finding him in a chapter. He is confirmed to also be kidnapped by Bowser early in the game. He is also confirmed to be a speedy character.

Toad is a player on the Peach Royals team on the multiplayer Wii sports game Mario Rugby League. He is one of only two males on the team and is one of the strongest, he is of above-average strength and below-average speed. He can release spores to prevent tackling.

Toad is the first character that Tucker meets in The Mushroom Kingdom. He also volunteers to save Peach with Tucker, something he wouldn't normally do. Throughout the game, Toad develops a strong friendship with Tucker. He can gain any of the power-ups and is a very basic character, and also Tucker's "sidekick".

Jungle. He helps Princess Peach and Luigi get to an island that a Hawk took their water supply tank to. In this game, Toad can swing on weak ropes/vines due to his lightweight and he can also fit through small holes because of his size.

A Damsel in the Levels

In New Super Mario Bros.: Clash of the Koopas, Toad gets kidnapped by Bowser Jr., and he gets trapped in a ? Block in a random level. Only the player(s) can save him. If the player(s) bring him to the Flag Pole, then he/she will get a Mushroom House (0, 1, and 2 for Green, 3, 4, 5, and 6 for Red, and 7, 8, and 9 for Yellow). He introduces you to the red ones. Blue Toad and Yellow Toad are also playable in the game.

In Ultra DK a Toad can be seen in a cage in one of the levels. This cameo was in-game made by WiiSmarts Inc., a company that Toad is the mascot of. He is also set to appear in New Super Mario Kart as a light-weight.

Toads appear in the Chinese anime, where they were working for Peach in her castle.

Along with Mario and the other famous characters in his series, Toad was recently redesigned for The Legacy of Mario. He is presented in a vastly different manner, being a noble (albeit clumsy and occasionally useless) Knight, who even joins the heroes on several adventures.

Finally Playable in a 3D game

Toad is a playable character in Super Mario Star Journey, a 3-Dimensional game for the Wii. Toad is the very first character to be unlocked. Since there is at least one Super Key needed. Toad is a very fast character, but his jumps are very poor. His special Power-Up is the Moon-Jump Mushroom, an item that transforms him into Moon-Jump Toad. As Moon-Jump Toad, he can jump very high, which is very handy for his jumping stat.

Toad is playable in Mario Kart: Blazing wheels as a default.

Toad appears as a playable character in Mario Kart Wii 2.0.

Toad appears in Super Mario Bros. V as hostages of False Bowser on World 1 and the host of Red Toad Houses he gives an item away this time it's like at the casino when it lands on the powerup you get that powerup

Toad is the main protagonist in the game. He must save Toadette, because she's been kidnapped by someone, at first through to be Bowser.

In this crossover game, Toad (as Captain Toad) is the main protagonist, alongside Toadette. He is the trainer who has to start his journey, making friends, catching and training Pokémon, defeating the Gym Leaders, etc. His story starts in Toad Town and he lives in Princess Peach's Castle.

Toad reappears in the New Nintendo 3DS game Mario Party: Wonder World for his most recent appearance in the series. His Celebration Spirit is Bud.

Toad appears as a playable fighter in Lumoshi's Cookies: War.

Toad appears in Runner Collection as the main character in the game Toad Run. He has to go on an adventure to save his friends from Bowser.

Toad appears again in Extreme Mario World. Unlike SM3DW, he is in his red/original design.

Green and Blue Toads appear as playable characters in this game but, Red Toads and Toadette can be found in shops and Toad houses.

Toad appears as a playable character in Mario Tennis: Heroes Vs Villains. It is a speedy playing type being very fast but not very strong. Toad’s zone shots are Toad Head Slide (Toad slides on his head either forward or backward) and Dizzying Spin (Toad spins fast either left or right). Toad’s Special Shot is Propeller Box Dive in which Toad puts on a Propeller Box and uses it to gain height and then dives towards the ball (this references a thing Toad does in Super Mario 3D Land). Toad’s villain is Wario and his Hero Special Shot is Color Bomb Rain where Toad sends a bunch of colored bombs down on Wario (this references Wario Woods). If Wario uses his Hero Special Shot Cancel Toad will throw the colored bombs but they will not explode causing the cutscene to end.

Toad appears as both a playable character and a referee. He is a referee from Sydney 2000 to Torino (Turin) 2006. He is playable at the 2019 Dream Olympics, where he is a speed type character.

Toad appears in Super Mario: Emoji Battle as a playable emoji. Toad is one of four starter characters the player can choose from alongside Mario, Luigi, and Peach. Toad's Special is: Toad emits spores across the board that clear emojis. Toad's Attack Special is: Toad creates Mushroom hazards on the opponent's board. Toad is a common emoji that can be unlocked by opening a ? Block, opening a Brick Block, or battling Toad in Character Battles. Toad's favorite item is the Mega Mushroom. If Toad has the SMB2 Mushroom Item equipped his Special will change to: Toad picks up and throws a Banzai Bill which clears emojis in its path. Toad's emoji can be fought in the following Character Battles: Toad and Toadette. Toad's Badge can be unlocked by unlocking Toad, using Toad's Special within fifteen seconds of the match, and unlocking any Mushroom item.

Toad with a drink 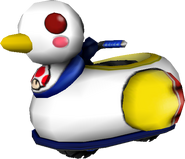 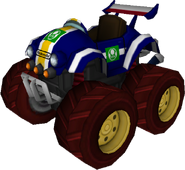