Tiptup is one of the ten playable characters included in Diddy Kong Racing, and a recurring character within the Banjo-Kazooie series. He was one of the many characters called upon by Diddy Kong after learning that Timber the Tiger's home was being threatened by an otherworldly invader.

In Banjo-Kazooie Tiptup is the director of a choir that performs within the shell of the giant turtle Tanktup found in Bubblegloop Swamp. Banjo and Kazooie can earn a Jiggy from Tiptup by memorizing the song played by the six turtles he conducts. Sometime in the two year gap between Banjo-Kazooie and Banjo-Tooie, Tiptup had been kidnapped and forced to act as a tourist attraction for visitors to the Turtle View Cave in Jolly Roger's Lagoon. In addition to revealing the Tiptup has nineteen daughters, Kazooie can help him hatch the egg containing his twentieth child, whom he wishes to be his first son. After Tiptup Jr. is successfully hatched, the two return to the sea, presumably to go live a peaceful life with the rest of their family.

Tiptup's appearance is rather simple, as he is a turtle with very few remarkable features. He possesses light green scales, with yellow bands across his stomach that connect to his dark brown shell. In Diddy Kong Racing he wears orange gloves on his hands, and has grey eyes; his Banjo-Kazooie appearances lack the gloves and instead give him blue eyes. Artwork for Diddy Kong Racing also depicts Tiptup with three yellow claws, or nails, protruding from both of his feet.

Tiptup was planned to appear in the cancelled game Banjo X, and was one of the few characters whose redesigns were shared by developers years later. While he possessed a design that was quite different from his Nintendo 64 counterpart, it was still very much that of a normal turtle. His shell appears to wrap around his entire body, with the part stretching across his stomach being orange in colour. The main addition to Tiptup's Banjo X counterpart are brown spots that dot the backs of his head and hands, and the tops of his feet.

Tiptup reappears in the Nintendo Wii racing game Donkey Kong Racing alongside a large number of other Donkey Kong characters. He is considered part of the "Miscellaneous" category of characters, being that he is neither Kong nor Kremling. In the Land battle, Tiptup can punch and kick.

Tiptup is a player on the Diddy Kong Racers team on the multiplayer Wii sports game Mario Rugby League. He is a fast character with good speed and fast strength. His special skill is to spin a shell as an extended tackle.

Tiptup appears in Mario Test Baseball as a member of the Donkey Kong Bongos. With him, all of the Diddy Kong Racing characters have been added into the game.

Tiptup appears as a playable character in Donkey Kong Test Cricket. Tiptup is a member of the Rocking Racers team, which is led by Diddy Kong and consists of the playable cast of Diddy Kong Racing. 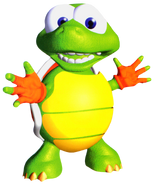 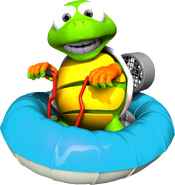 Retrieved from "https://fantendo.fandom.com/wiki/Tiptup?oldid=2984600"
Community content is available under CC-BY-SA unless otherwise noted.