Tiny Kong (Japanese: タイニーコング Tainī Kongu) is a recurring character in the Donkey Kong, who first appeared as one of the five playable Kongs of Donkey Kong 64. Following the buyout of Rare Ltd. by Microsoft Studios Tiny Kong received a redesign, with Diddy Kong Racing DS giving her a more-teenage appearance instead of the childish one she debuted with. Despite this, much like how Luigi is the taller, albeit younger, brother of Mario, Tiny Kong is the younger sister of Dixie Kong; she is also the cousin of Kiddy Kong and Chunky Kong.

Like her older sister, Tiny Kong utilizes her twintails in a manner similar to a helicopter's propeller, and this has remained her most-notable trait throughout most of her appearances. Her name, which has since become ironic due to her teenage redesign, initially referred to her small, childlike form and her ability to shrink to a microscopic size; this ability, as well as her agile movements in Donkey Kong 64, served as the basis of her verse of the DK Rap played in the game's opening. Like all of the playable characters from Donkey Kong 64 Tiny Kong was also associated with an instrument in this title, with her playing the saxophone.

In Donkey Kong Continent, Tiny is an unlockable character for multiplayer mode. In it, she is a clone of Dixie, but slower and stronger.

Tiny appears as a secret character in the multiplayer Wii boxing game Donkey Kong Knockout. She is taller, stronger and slower than her sister Dixie Kong However she is still a weak and fast character. Her special move is to shrink in size and fly towards her foes with the banana fairies damaging foes repeaditly. She is unlocked by completing the game with Dixie Kong on any difficulty setting.

Tiny Kong appears as a playable character in the multiplayer Wii racing game Donkey Kong Racing. She appears in her modern appearance and as part of the Kong category.

Tiny Kong is a player on the Donkey Kong Wilds team on the multiplayer Wii sports game Mario Rugby League. She is a fast and strong character with poor skill. Her special skill is to shoot people with her crossbow as an extended tackle.

Tiny appears in Donkey Kong Country 4 as a playable character. She is unlockable in the Desert Ruins world. She can fly for a short moment if she move her ponytails like an elicopter.

Tiny Kong is going to be an unlockable character for Donkey Kong Country D.I.Y. To unlock her, the creator must create and play eighteen levels.

Tiny Kong appears as one of the several playable characters in Donkey Kong Kart D.I.Y. 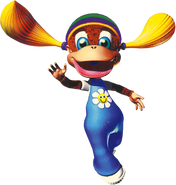 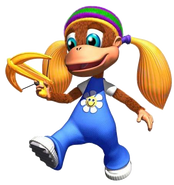 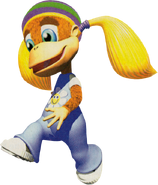 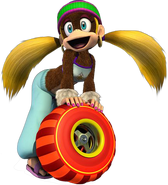 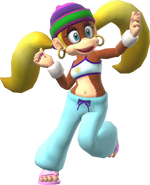