Timmy Nook (Japanese: まめきち Mamekichi) and Tommy Nook (Japanese: つぶきち Tsubukichi), collectively known as the Nooklings (Japanese: まめつぶ Mametsubu), are twin raccoons and a recurring character within the Animal Crossing series. The Nooklings are the apprentices of Tom Nook, who, in most Animal Crossing titles, work for him once his store is upgraded to Nookington's Department Store. In Animal Crossing: New Leaf the Nooklings are the purveyors of their own shop, originally titled "Nookling Junction" it can later be upgraded to "T&T Mart", "Super T&T", "T.I.Y.", and finally "T&T Emporium". In Animal Crossing: New Horizons both twins work in the Resident Services building alongside Tom Nook. Timmy and Tommy are commonly characterized by one of the twins following-up the other with the end of their sentence, intending to speak in unison.

Timmy and Tommy's exact relationship to Tom Nook is never explicitly made clear within the Animal Crossing series, despite their appearances being very similar to his. Prior to Animal Crossing: Wild World they were hinted to be Tom Nook's sons or nephews, though in Wild World Tom Nook contradicts this, telling the player they have no familiar relation. Villagers throughout the series offer the explanation that the twins are orphans that Tom Nook adopted, though this has not been confirmed by Nook himself.

Timmy and Tommy appear identical in every way, as in many titles the same model is used for both of them. Both appear very similarly to Tom Nook, though are, due to their age, of smaller statures. Both are short brown tanuki with large navy blue eyes bordered by a large mask-like patch of dark brown fur. They have fairly short, but also plump, tails that match their natural fur colour, though eventually blend into the same dark brown that borders their eyes. Up until Animal Crossing: New Leaf the Nooklings were always shown in aqua-coloured suits, white dress shirts, pink ties, and a lack of any pants - this mimicked Tom Nook's suit design, and apparently served as the uniform for Nookington's. In Animal Crossing: New Leaf however the two Nooklings are given different clothes depending on the state of their current store.

Timmy, despite his voice being higher pitched, is the older of the two siblings, who can apparently be distinguished by an unseen mole on their paws.

Timmy and Tommy make an appearance in Jake's Super Smash Bros. in several small roles. The Nooklings primarily appear alongside Tom Nook in his Final Smash, holding out empty bags to catch Bells that rain down from the sky around them that damage opponents. In addition, both Nooklings also appear in one of Tom Nook's victory animations, where they jump up and down happily. 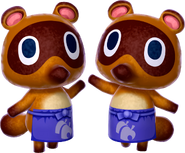 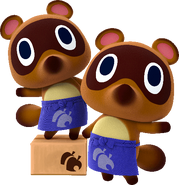 Add a photo to this gallery
Retrieved from "https://fantendo.fandom.com/wiki/Timmy_and_Tommy?oldid=3200025"
Community content is available under CC-BY-SA unless otherwise noted.