Tim J. Koopa is one of Bowser's main adopted Koopalings. He is older than Bowser Jr., but younger than Harley. Despite this, he is very smart, and is obsessed with rocks of all shapes and sizes. In battle, Tim uses his ability to throw rocks, which replacing the wand that almost all the other Koopalings have

Since Bowser is playable, Tim appears as the tour guide in the rock world, World 5 area of the Enemy Zoo. In this appearance, he is shown to be nerdy, and not crazy like Iggy and Lemmy. He keeps mentioning the fact that he likes rocks.

Tim later appears in Super Mario Star Journey in a Boss Prank-Star Mission in Lemmy's Chaotic Circus. He attacks with rocks, but later with boulders. To his him, Mario must be Rock Mario and just hit him when being a boulder. His high jumps and speeds might make that a challenge.

Tim J. Koopa makes references about rocks, boulders and rock sayings in his dialog before battle.

Tim is one of the Super Koopa Seven in this game, one of seven Koopa Siblings hired by Mario and Lakitu to help him stop the Toads from rescuing Luigi. Tim is fought in World 1, and runs around like Larry did in New Super Mario Bros. Wii, shooting white fireballs and spinning in his shell, making a simple fight. After the tower, he appears in the world's castle, and the player must fight him just like before, however Lakitu shows up and splits the ground into five moving platforms.

After that, Tim is not seen again in the game. 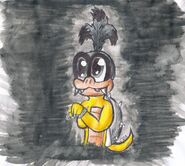 A request for Emerald by Crazzycupcake 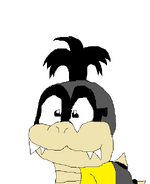 Tim by Emerald the Dark Wolf