She is a part of the ancient Echidna tribe that made its first debut in Sonic Adventure and was further explored in Sonic Chronicles: The Dark Brotherhood. Tikal sometimes talks to Master Emerald for help; this can be attributed to her father being decidedly reckless, the leader of the tribe and prone to taking lots of risks that could cost the lives of the tribe.

Tikal makes an appearance in Sonic Heroes 2. Here, she is dazed and confused; with Knuckles discommunicating himself until further notice, Scourge on the run, an incensed Eggman Nega and Metal Sonic storming off in a huff and Shade, not being able to run as fast as Knuckles, being the only one visible, what has happened is unknown to Tikal (thus presenting dramatic irony).

Tikal is set to appear in the upcoming Sonic Final Battle Genesis. She is a member of Team Echidna, a team comprised of herself, Emerl (who happens to be rebuilt), and former member of Team Heroes (formerly known as Team Sonic), Knuckles the Echidna. During the long time gap between Sonic Generations and Sonic Final Battle Genesis, Tikal, through the use of the Master Emerald, has travelled to modern times and began forming Team Echidna after Emerl was resurrected from the Chaos Emerald his soul was encaged in after the events of Sonic Battle. Around that same time, Knuckles realized that he had been leaving the Master Emerald alone far too frequently, and vows to stay on Angel Island forever, like he was destined to be. When Tikal and Knuckles meet again, they get to know each other, and Tikal teaches Knuckles some Echidna techniques, like Thunder Arrow and Gaia Quake, thus leading him to join Team Echidna and leave Team Heroes. Tikal senses the villain, Necrobius, causing havoc on a faraway planet, and she builds a magic Chaos forcefield around the Master Emerald before she takes off with Emerl and Knuckles to stop the ancient Echidna villain.

Like most characters, Tikal appears as an unlockable playable character in Sonic Reunion. She also appears in numerous cutscenes amongst other characters.

With the Master Emerald once again splintered and cracked due to the sinister machinations of CHIMERA, Tikal has been released into the world once more alongside Chaos. Almost the same gentle pacifist as ever, she seeks to try and convince CHIMERA and others who have become swayed by K2 Lou from causing devastation to the planet. When Chaos is captured by CHIMERA she also seeks to try and find allies to release him from his captivity.

However, her time spent "merged" with Chaos in the Master Emerald has affected her personality and she has become more willing to take action against villainy herself, a bit more similar to her Sonic X appearance. It is this that allows her to . However, since she is simply a spirit she is unaffected by K2 Lou's mental manipulations; even so, she seems to appear to others on a few occasions when in truth it is a hallucination used to manipulate heroes to inadvertently help K2 Lou's cause.

Her own story scenario involves her attempt to stop K2 Lou herself by collecting shards of the Master Emerald as well as collecting the Chaos Emeralds, although at this point they have evolved into the Super Emeralds. Her time spent with Chaos has effectively begun to merge the two beings, and as such she has begun to exhibit some abilities reminiscent of Chaos' such as the ability to stretch her limbs beyond normal capacities. She also appears numerous times in Mad hero scenarios, attempting in vain to stop their freefall into insanity. She occasionally has visions of her father, Chief Pachacamac.

Tikal appears as a VIP character, meaning she can appear in the audience and spotting her gives the player an extra reward. 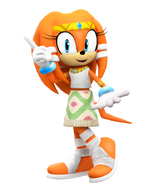 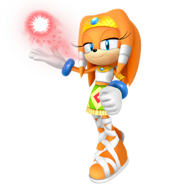