Fantendo - Game Ideas & More
Register
Don't have an account?
Sign In
Advertisement
in: Free to use Characters, Characters, Original Characters,
and 11 more

Tiffany Slater was introduced as the main protagonist of Tessellate, and is also the daughter of Tess. She is the sole user of the Revolvise, a special Revolver that can shoot elemental bullets. It was also revealed in Tessellate: Bad Luck that she suffers from Schizophrenia.

Tiffany's life began pretty abnormally, as she was created in a machine by her mother using a genetic code. Tiffany was created at around the age of six, and her life began suspiciously when a group of police officers ambushed the building when learning Tess' whereabouts. Due to this, Tess was forced to flee and Tiffany had to fight through all the officers, which she was able to do through inheriting fighting abilities from her mother.

Fast forward to around sixteen, where Tiffany is in an orphanage supposedly on the brink of closing due to several concerns surrounding the safety of the building. Suddenly, glowing radioactive-looking creatures begin to attack the city and her orphanage, causing her to flee for safety.

Tiffany presents herself as a very serious and emotionless being, which makes it difficult for her to work with others and tolerate them unless in a time of crisis. She is also very blunt when talking to people in normal conversation, which again makes it awkward for others. However when somebody manages to break this act, Tiffany is a completed changed person, which makes her appear more happy and jolly. At all opportunities, she keeps her personal life and professional life separate to avoid complications, and finds extreme discomfort in when they overlap ever so slightly.

Due to gene inheritance, without any training, Tiffany is very skilled when it comes to fighting using martial arts. She has already mastered four martial arts with barely any experience, making her very prepared for fights. However, she is the opposite with weapons, and finds it extremely unnecessary and hard to use them, until she managed to master the Revolvise, a special gun which uses specially designed elemental-themed bullets to shoot.

Tiffany appears as the main character in the game. After being attacked by glowing creatures, Tiffany eventually meets Kimiko, who helps her through the attacks. They find a person called Leire, who after kidnapping Kimiko is forced to bring Tiffany to Tess. Tiffany then meets her mother, and tries to kill her, before escaping a collapsing building with Kimiko back at her side.

Tiffany returns as the main character in Bad Luck. She immediately meets an aspiring journalist called Selene, who helps her on her travels. They eventually reunite with Leire, Kimiko and Tess, after learning she didn't die from the collapsing building. After searching and trying to escape from the Predators in Pader City, they explore an army base which eventually explodes, sending Tiffany into a coma. She has a dream about Kimiko, who reveals herself to be a figment of Tiffany's imagination, which proves to be true when she eventually wakes up, and discovers she suffers from Schizophrenia.

Kimiko was Tiffany's first and best friend. They became really close when fighting against Tess initially, and have been very close ever since. However, Kimiko revealed to Tiffany that she only exists as a figment of her imagination, which devastated Tiffany.

Tiffany and Tess do not get along. While Tess tries to reach out to her, Tiffany has no interest and believes that she is just trying to manipulate her in someway. Tiffany tried to kill Tess, but it failed.

Tiffany initially resented Leire for helping her mother, however, the two became allies after Tess' fake death. They developed a strange bond and have vowed to look after each other, despite Leire's pyromaniac ways.

Tiffany and Selene quickly became friends with Selene managed to save Tiffany's revolviser from the Predators. Selene decided to join them on the adventure to experience something new and exciting. 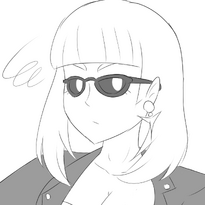