Tiara Boobowski is a female Mobian manx cat who was originally set to appear in the scrapped Sega Saturn game, Sonic X-Treme. Unfortunately, since the game never saw the light of day, she never made an appearance. Apparently, though, Fusion Thunder Games asked permission from Chris Senn to use Tiara in their own Sega Saturn project, Sonic the 3D Hedgehog. But alas, because of the Sega Saturn's failure, that game was shelved, despite being finished, and Tiara's chances of making a proper appearance were lost. On June 10th, 2012, someone had burned Sonic the 3D Hedgehog to a PC CD-ROM, and the game was fully playable, with Tiara as one of the main playable characters.

Tiara Boobowski appears in Sonic the 3D Hedgehog as one of the four playable characters in the game's main story. She learns that a giant beast named Ogarate has been released to terrorize the world and has murdered her father, Gazebo Boobowski, so Tiara wants to stop him. After Sonic defeats Ogarate in a battle, he gets away and flees to Tiara's home island, North Island. Tiara is mad at first when she learns that Ogarate has escaped, but after calming down and explaining the situation, she teams up with Sonic and his two friends, Tails and Amy, in tracking down Ogarate and saving the 7 Rings of Order. Throughout the course of the game, Tiara becomes Amy's rival, even though Tiara keeps trying to tell her that she doesn't want to have anything romantic to do with Sonic. After the last Ring of Order is found in Tower Topaz, Tiara disappears and doesn't come to the heroes' aid in Magma Mines. In the final stage, the third act of Dreaded Deep, it turns out that Tiara was behind Ogarate's release and spreading of evil across the world all along, or so it seems. Sonic, Tails and Amy have a mighty showdown with Tiara, where she used her staff as her weapon of choice as usual and tried to attack the heroes with her laser missiles and martial arts, along with new attacks, like shockwaves, magic bombs, a gale of wind that would draw the heroes toward her, fire snakes and a meteor shower attack. After taking some abuse, Tiara resorts to using the Rings of Order to power an orb-shaped control mechanism that can manipulate all the terrain on North Island, whether it be the surface or the underground. She traps herself in it and uses it to fight the heroes in a grueling battle to the death. After she is defeated, it turns out that the Tiara that the heroes have been fighting was an indistinguishable clone made of metal covered in synthetic fur and skin. The Tiara robot pulls out her last resort: cannons which extend from her face and midriff, proceeding to unload all of their firepower until she finally succumbs to the damages made to her systems and explodes. With the cat out of the bag, a guy that looks like Gazebo Boobowski, which turns out to be Ogarate, tells the heroes that he'll rebuild the robot, but his disguise wears off and makes an earthquake, unintentionally releasing the real Tiara, who had been kidnapped and locked away in a coffin ever since the heroes collected the seventh Ring of Order. She was going to be used to scan data for new Tiara robots, but after being released, she helps Sonic, Tails and Amy in defeating Ogarate. When Ogarate's uses the 7 Rings of Order to unlock his true form, Lord Etarago, Tiara was ready with the other three heroes, and together, they defeated him without Sonic or Tails having to resort to turning Super (since the Chaos Emeralds are nowhere in the game). After Ogarate is defeated and sealed permanently in Dreaded Deep, Tiara finally decides to confess her love to Sonic, but Amy gets in the way, leading to the two girls pushing their heads together and racing across the island while trying to push each other away. Later that night, when Amy and Tails are asleep in some huts in a town near Golden Garden, Tiara comes up to Sonic (who is sitting on a ledge over the edge of North Island) and finally confesses, followed by kissing him on the cheek, making him blush. Tiara then decides to spend the night sleeping next to Sonic under a tree. The next morning, Tiara waves good-bye to Sonic, Tails and Amy as they sail back to Westside Island on a luxurious cruise boat. In the final shot of the ending, Tiara imagines that Sonic is still right in front of her and folds her arms, blushing.

Sonic the 3D Hedgehog: One World for All

Tiara Boobowski makes a reappearance in the Sonic to 3D Hedgehog sequel, Sonic the 3D Hedgehog: One World for All. Her role in the game is that she has become a member of the Malice Gang, a new villainous group. She has joined forces with an anonymous medic, Ogarate and a mysterious woman who appears to be the gang's leader. Sonic believes that either Tiara has been brainwashed to work with these villains, or this is Tiara's robot doppelganger from Dreaded Deep, rebuilt by the evil mystery woman a month after she exploded. Tiara acts as one of the major antagonists, making monsters to try and destroy Sonic, Tails, Amy and Knuckles, trying to tear the group of heroes apart, operating the Malice HQ and acting as the false final boss. After the journey into Malice HQ, Tiara deals with the Mobian heroes personally, but is almost utterly defeated. As a final resort, she tries to destroy them with a towering mech that looks like Rouge the Bat. The mech is destroyed and Tiara is beaten completely, and it turns out that this Tiara is the real one, but she was possessed by a demon called the Murtopian Fog Monster the entire time. In the final act of the game, Tiara will assist the heroes whenever necessary. At the very end of the game, she combines her Crystal Blade with the Crystal Rings possessed by Sonic, Tails, Amy and Knuckles, granting them the strongest power on both Planet Mobius AND the World of Murtopia. After the adventure is over, Tiara invites Sonic over for a secret lunch where she gives him her blessing in the form of a passionate kiss.

Sonic the 3D Hedgehog: Guardians of Future Yet to Come

Tiara Boobowski is confirmed to reappear in the third installment of the Sonic the 3D Hedgehog series. In this installment, she'll be playable again. She follows Sonic, Mighty and an unnamed character to a lost civilization that is overrun by an evil entity covered in shadow.

Tiara appears in Sonic Heroes 2. She inhabits Sandopolis due to its heat and her preference for tanning. After Team Archaic wakes her up, she shows them a secret room that contains the shrinking technology used by Naughty Nack in the Sonic the Comic Knuckles Knock-Out Special story "Traitor of the Lost Pyramid". Later, with Tiara back to sleep, they sneak back and reactivate the technology.

Tiara without her colours (art by Chris Senn)

Tiara as a villain in Sonic the 3D Hedgehog: One World for All (art by Chris Senn, coloured and modified) 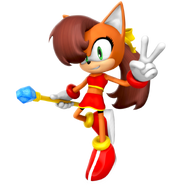 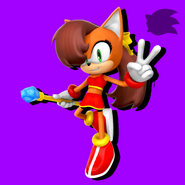 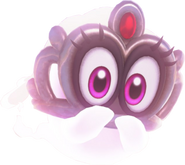