The Thrusterhound is one of many species that inhabit the realm of the Spectroverse a border world that wraps around ours like a ring.

In the Spectroverse, Thrusterhounds are some of the most feared and terrifying predators along with being the most abundant when it comes to variants, subspecies, and many other relatives to it.

Thrusterhounds originated from a strand of DNA belonging to the Feldinaurian family of Spectrovere fauna, with the earliest record of the DNA strand dating back before our universe was even created at an outstanding 20.4 trillion years old, scientists who have researched the fossil record of the Thrusterhounds lineage and many other like it are still confounded and in awe of how far back these magnificent creatures came from and how they grew and evolved over many eons.

The Thrusterhounds of today are well known because of their 6 mono-toed legs, a large maw holding over 100 teeth in it that are all lined up in a cone shape gum structure in its mouth to easily digest and chew its dietary matter.

Thrusterhounds are also known for there striking red/orange/yellow-colored skin that feels like fur but is actually closer to scales, biology wise anyways, a lack of eyes meaning that these canines get around by using sound to guide them along to finding food, water, or to get the hell out of dodge if it's about to face a much more dangerous creature and it can also detect vibrations on the ground to have senses of spacial awareness to make sure these hounds don't crash into something when walking or running, which is what Thrusterhounds love to do the most.

Utilizing their main back thrusters to ignite methane gases in their tails to create a natural rocket booter to shoot off at high speeds, some Thrusterhound's have been known to clock in at over 120 mph being able to keep up with targets that are even faster than it, that's also due in part of Thrusterhound's needing to stop and regenerate their stamina build back up meaning that these things have high endurance, but that also comes at a cost.

Weaknesses and Domestication Upsides and Downsides

While Thrusterhounds are extremely agile, durable, and ferocious creatures they can't turn corners even if their lives depended on it, if you ever see a Thrusterhound out in the wild and they start charging at you step out of the way due to their inherent flaw and if they do attempt to try and make even the slightest turn they will end up tripping over their own legs and either end up getting one of their bones broken, teeth being knocked out, a toenail being ripped clean off or worse breaking their necks due to the intense speed and the sudden stop will cause a deadly case of whiplash causing the creature to bite its own dust.

Despite all of these flaws, these are not the types of creatures to mess with, even domesticated ones can get awfully vicious and angry if the owner of a Thrusterhound doesn't tend to its very high maintenance needs, its going to turn on you one day and you will be deadly sorry for ever mistreating it, on the plus side they make amazing guard dogs along with police dogs if given the right amount of training and discipline.

Thrusterhounds are mostly carnivores that eat nothing but the rich and hardy meat of the other creatures that inhabit the Spectroverse but these aren't only limited to the meat of other creatures, fossils of its ancestors and a tooth sample from an elderly Thrusterhound have revealed that they sometimes eat plants to help stomach the more toxic and hard to digest meats however plants don't contain that much nutritional value that matters to the Thrusterhound and its other subspecies and its variants (say for one in particular that I will mention at a later date) so its a pretty rare occurrence to see a wild one dinning on low laying ferms or crunching on some iron-rich bark from Organ Trees.

Thrusterhounds also posses many attacks associated with fire and sunlight, for example, Thrusterhounds can ignite its teeth to help rip through creatures that have a hide of pure metal or have many layers of very strong glacier ice, it can also gain a massive jump boost with its thrusters to be able to leap massive distances like to other cliffs or to safely cross rivers, lakes, and streams, speaking of which, Thrusterhounds are able to travel so fast that they can run across water similarly to the basilisk lizard here on earth and if you notice a small cavity is on one of its lone shoulders, that's where all of the Thrusterhounds energy is stored from resting, eating and all of the captured CO2 in the Spectroverses atmosphere meaning that they also act like oxygen filters for the surrounding air granted its a small amount but it's still a unique biological feature these things have.

When a Thrusterhounds energy cavity is at full capacity it starts a cycle known as a blue flare, which is when all of that primal energy is unleashed all across the Thrusterhounds body as it turns a blue color, its scales flare up and it gains a large head crest giving it enhanced bone strength, power, and the ability to safely turn on a dime due to the massive spike in cognitive control, blue flares usually last around 20 years meaning that these last until the Thrusterhound reaches a certain age aka when it starts getting really old.

Elderly Thrusterhounds turn black and orange with hardened scales and facial hair of sorts giving them a much more calm and relaxed vibe as these Thrusterhounds have turned docile and will not attack anyone even when they are messed with.

The average life span of a Thrusterhound is around 50-70 human years meaning that these will live for a very long time, a few of them have outlived this some reaching over 150 years of age and still being active and healthy even for such an old creature.

the main mascot of the game and the very first alien you see and play as, a jack of all trades master of none with balanced stats and a varied move pool making this a pretty well-rounded creature overall for this game.

Thrusterhound appears as a playable character in Nintendo & Fantendo Play: Dodgeball! on the Blue Faction. They have generally balanced stats with a spike in speed and a drop in jump power. Their special move is Burning Fetch, a state they can enter that allows them to ignite dodgeballs they catch, which increases their speed and damage they inflict.

Thrusterhound appears as one of the games main fighter cards, he uses flare jaw as one of its main attacks

Thrusterhound appears as one of the playable characters in this other fantendo smash bros game by empress scarlet, thrusterhound's moveset was pulled directly from Fantendo Smash Bros. Radiant 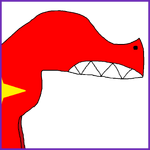 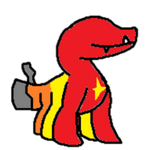