Fantendo - Game Ideas & More
Register
Don't have an account?
Sign In
Advertisement
in: Articles under Construction, Free to use Characters, What is the New Fantendoverse?,
and 8 more

Threat-Tan-Doe is a being created by a reinstated The Threat during the story of Fantendo Smash Bros. Combat.

During the story of Fantendo Smash Bros. Combat, the four gods of the New Fantendoverse - The Fan, The Enemy, The Other and The Threat - each summoned their respective human ambassadors, being Fan-Tan-Doe, Enemy-Tan-Doe, Other-Tan-Doe and Threat-Tan-Doe, to summon 64 fighters to participate in the Fantendo Smash Bros. games. Things all went to plan until Threat-Tan-Doe backstabbed the team and plotted to use her Catalyst powers to take over the many universes, and in doing so turned the entire roster (save Dragon Queen) into marketable plushies.

Threat-Tan-Doe is similar inappearance in many (but not all) factors to a human girl, but posesses a few abnormal features. She has purplish skin, dark purple hair with clippings of Volt in a similar fashion to the other -Tan-Does, four glowing yellow eyes, a muted purple dress similar to her creator, The Threat, and an eldritch tail similar to Fan-Tan-Doe's but slightly longer and with a purple/dark purple color scheme.

Threat-Tan-Doe posesses many of the other three -Tan-Does' powers, as well as many other Fantendoverse characters'. 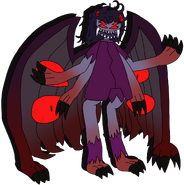