Fantendo - Game Ideas & More
Register
Don't have an account?
Sign In
Advertisement
in: Articles under Construction, What is the New Fantendoverse?, Games,
and 2 more 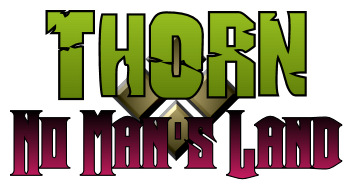 Thorn: No Man's Land is a 2D beat em' up for the Wii U, taking place in the New Age Fantendoverse canon. It follows Thorn and fellow siren Rose in two stories, both set on the siren homeworld of Meadow.

Thorn: No Man's Land is a two-dimensional beat em' up game with platforming and puzzle elements, featuring two playable characters with unique abilities and stories. Each story features 18 missions, with an additional mode, Trials, consisting of short self-contained challenges available after beating both stories.

Both playable characters have the same basic abilities - a double jump, basic attacks, and the ability to sneak in order to avoid detection. The differences come mostly in the form of handling and weaponry - Thorn wields two knives, has floaty jumps, and can jump off walls, while Rose has a trident, more precise movement, and a quick dash.

Thorn: No Man's Land features two stories - one featuring Thorn, one following Rose - which are both made up of 18 missions, along with a prologue and epilogue. Both can be read here. Summaries of both stories will be posted here at a later date.