Fantendo - Game Ideas & More
Register
Don't have an account?
Sign In
Advertisement
in: Free to use Characters, What is the New Fantendoverse?, Females,
and 14 more

Thorn was one of the many characters introduced in Fantendo:Playing War. She was introduced as a love interest for Unten, and one of the inhabitants on Zeon after it exploded. This was later revealed to be a lie in Fantendo Smash Bros. Shattered, revealing herself to be a Siren. The Siren empire and her backstory were later elaborated on in Thorn: No Man's Land. She will be a major playing character in the New Fantendoverse according to PabloDePablo, writer of Thorn: No Man's Land.

Thorn is a Siren with vivid lime green hair and heavy bags under her eyes that she occasionally covers with black eyeliner. She has green eyes that match her hair.

In Fantendo Smash Bros. Shattered, Thorn has a tattered black dress with a light red belt, a dark blue and red satchel over her shoulder. She wears long green socks and military boots and fingerless gloves. This look carried over to her New Fantendoverse debut in Thorn: No Man's Land.

In Fantendo Sports Resort, Thorn wears a bikini top and green shorts under a red coat, with a small Fantendo Smash Bros. sigil on one of the pockets. She has green earrings shaped like diamonds and some green shoes resembling a shorter version of her boots.

In Thorn: Hollow Victories, Thorn wears a tattered black dress again, this time with a pale green collar and a bright green satchel. She has some slightly torn striped green stockings and smaller boots on. She occasionally wears a dark red jacket with torn sleeves throughout the story.

In Fantendo Smash Bros. Victory, Thorn has a very different look; she's put her hair up in a messy ponytail and has a lot more red in her color scheme, wearing a red trenchcoat and fingerless gloves. She has a grey shirt on underneath and a white bandanna with some black diamond patterns on it over her neck. She now wears grey jeans with the inner thigh cut out, with striped green stockings underneath.

Thorn is incredibly determined and stubborn and will go to any lengths to achieve her goals. She tends to act a little confrontational but is easy-going and friendly at heart, especially when with people who take the time to bond with her. She has a good sense of humor and an optimistic approach to life, taking every day as it comes.

Underneath her tough yet fun-loving surface, Thorn is highly conflicted and has a tendency to run from her personal problems rather than face them. She perceives any threat to her personal freedom as incredibly upsetting, even if it's for a good reason. She's been known to suffer from panic attacks but tries to bottle it up around others.

Thorn never knew her parents, having grown up on the streets back on Meadow. She was initially raised by other Thorns, but ultimately became a drifter until being found by Rose, who chose her to join her in overthrowing the Benefactors.

Thorn ultimately broke out of Rose's facility after having doubts about the cybernetic modifications made to her fellow soldiers. She stole a spaceship and went on the run, making ends meet and living self-sufficiently in her spaceship.

While not having any real 'powers', Thorn has incredible willpower and is an excellent fighter, proficient with several bladed weapons. As a Siren, she has a sort of subtle 'supernatural charisma', but it's not something she controls and it's generally not enough to change the outcome of her interactions.

Thorn first appeared in Fantendo - Playing War as a love interest for Unten, falling for him over the course of the story and ultimately going with him into a black hole as part of a necessary sacrifice to save their universe.

Note: an important fact to keep in mind is that the idea of Thorn as a Siren wasn't introduced until years after Playing War was written, being a retroactive addition to canon that changes how her appearance in Playing War may be viewed.

Thorn eventually found herself in the Wasteland, joining forces with Rose Reaper, Oshyto, Henry the Moose, and Hooves to steal a ship from Hell and track down Unten, as revenge for Unten leaving her in the void. They attack Unten's ship as his group heads to Percivus, ultimately being defeated and handcuffed.

When the Fantendoverse was recreated after Clockwarx's defeat, several things played out differently - one such change was that Thorn never got involved with Unten and as such, didn't become unstable after years in the void.

After years of living on her own in space, Thorn inadvertedly activated a beacon that led Azalea, a former fellow soldier, right to Thorn's location. Thorn was captured to be brought to Rose, but escaped and went on the run, traversing Meadow's wilderness and fighting Rose's personal enforcers one by one.

Eventually looking for a way off of Meadow, Thorn began to suffer from vivid hallucinations of her past, leading her to fight Rose for closure. Despite winning the fight, Thorn dealt with heavy personal losses; people she once cared about were now dead and Rose had given her the name 'Zinnia', an important gesture in Siren culture that often symbolizes ties to authority. Choosing to take the problem out at the source, Thorn vowed to fight the Benefactors, heading back out into space.

Thorn was one of several "heroes" trapped on the planet of Labyrinth, using her skills as a talented fighter to help in clearing the dungeons. During a section where the path split and two groups of two people were locked in seperate dungeons, she and Unten developed a mutual respect for each other, giving each other some advice on life before heading back to their respective homes.

Yet again, Thorn was trapped with Unten and the rest of his 'team', this time in a sports resort used as a trap by White Goddess. She developed a close friendship with Syi, a scarecrow from the Zaxinian Lifts, the two often hanging out and making the best out of their situation.

After months of procrastination, Thorn was motivated to finally finish off the Benefactors after finding out Rose had once again started acting as their puppet. Although Rose and her new partner Forget-Me-Not were hunting for Thorn, it was Thorn who ended up coming to them after finding out the Benefactors planned to make her into a cyborg soldier.

Escaping from their clutches after being brought to the Hive, Thorn quickly waged a one-woman rampage against the Benefactors, making her way to the council. Rose joined her and the two reluctantly worked together, Thorn saving her life after a near-fatal fight with High Preacher Zavendol. The two head out into space together to rebuild on Meadow, Thorn seemingly forgiving Rose and deciding to become a vigilante.

Thorn and Rose have a complicated friendship, tracing back to Rose taking Thorn off the streets and giving her a proper home and training. Thorn is often at odds with Rose's more planned-out way of approaching problems, but admits it's a useful way of handling things.

Despite being enemies in the past, Thorn slowly warms up to Rose and forgives her for what she's done in the past. Thorn is vaguely aware Rose has a crush on her but doesn't reciprocate, being aromantic and too much of a drifter for a committed relationship with someone who has to stay on Meadow.

Thorn never really knew Forget-Me-Not on a personal level but considered her to be an unstable enemy, noting that she was "always going to be a problem" after her death.

Thorn initially considered Zavendol to simply be part of the collective Benefactors she was targetting, but after learning about his genetic experiments, became utterly disgusted with him, making her defeat of him as brutal as she could as revenge for what he had donem.

Thorn doesn't usually spend much time with Unten and his friends, noting that she usually gets entangled in larger matters when she does. Despite this, Thorn has respect for what Unten does and considers him to be an ally, taking his advice to heart and giving him advice of her own.

In the old universe, Thorn and Unten fell in love; this was a trick on Thorn's part, stringing Unten along for her own advantage. She grew to resent him after being left behind, actively hunting him down.

Thorn and Syi bonded at the sports resort, Thorn helping her feel better when Syi mentioned being upset over Hene not being at the resort. The two share some mutual interests and Thorn considers Syi to be a close friend.

Alternate version of her Victory art. 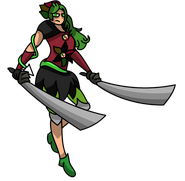