“No...no, you live. But next time you selfishly pull a gun on anyone, anyone, I won't give you anymore mercy.”
— Theo to Douglas, WotU/Chapter 6


Theodore Thomas is the main character of Wake of the Undead. In the first chapter, he wakes up on the side of a highway and can't remember anything from his past. He is a main cast member. He has been confirmed to appear as a playable character in Star Smashers 2.

Spoiler warning: Plot or ending details follow.
Not much is known about Theodore, not even his name. Any means of identifying himself was scratched out or missing when he woke up, so he went by the name Theodore Thomas written on a piece of paper. He also notices injuries on his arm, possibly suggesting a violent past. He is also very good with firearms.

Wake of the Undead

During the Amnesia storyline, Theo woke up on the side of the road, being incapable of remembering anything about himself. He eventually adopted the name Theo from a piece of paper, and figured out he was somewhere in Ontario. He then found a gun on a dead cop, and used it to kill a group of zombies. After brutally beating the last zombie, he was shot in the side of his head by Ron. He woke up a few days later in a group of survivors, and after proving he is worthy, he helped take over the school from the zombies. He witnessed Douglas kill Jane after she was bit, and shows anger and distrust towards Douglas thereafter.

After Douglas gets in a fight with Tyreese, Theo intervenes and then starts fighting with Douglas. Douglas grabs his gun and shoots Theo's shoulder as he is pulled away by Ron. As those two fight, Theo crawls to his gun. Douglas attempts to kill Ron, but Theo shoots him in the back. He lets him live, but with a warning never to to try to kill another human again. During the school zombie attack, he and the survivors travel for hours until they find a shack with supplies. During the night, he hears noises and he and the others go outside to investigate. He is then approached by a mysterious group of people.

In the Society storyline, Theo was seen in a photo found by Victor in Puslinch, Ontario, suggesting he or someone he knew lived there. He is later seen confronting Morgan and her group, and killing an undead Ben. He, Ron, Morgan, and Drake are then seen at the school retrieving the abandoned vehicles from the zombie-infested field.

He and the group are later seen entering Puslinch and meeting the new group. Victor immediately recognizes him from the picture. About a month later, James goes missing, and Theo, Ron, and Tyreese search the unsecured, supposedly zombie filled part of town. They find a man named Devon who hasn't seen James, but informs them of his own group, and says they are welcome there anytime. He, Ron, and Tyreese later return to the others and inform them of their unsuccessful trip.

He is schocked to see Tyreese's lower arm missing when he returns, and helps him when he faints. During Tyreese's blackout, Theo wonders off to Victor's lab and hears zombie moans. The next morning, he and part of the group, along with Morgan, Drake, and B, storm into the lab and confront Victor, Stephen, Reuben, and Leroy. After a mild argument, Theo runs into the basement, and sees the zombies, along with an undead James.

In the Secrets storyline, Theo is outraged at the fact that James has been zombified and is locked in Victor's basement. Being forced to leave him alone, Theo leaves in a fit of anger. He is confronted by Ron, who learns Theo is ready to leave. Ron tries to convince Theo to stay, but is interrupted when a car pulls up to the front gate. When Reuben and Leroy express their distrust of the new survivors, and intend to kill them, Theo steps forth, saying that he doesn't think killing them because Caleb murdered someone more than a decade ago is fair. Victor agrees, but wants them separated just in case.

Theo helps clear out a new section of the town for William, Quin, Hannah, and Caleb. He is one of the many people to witness Caleb's death. When Caleb reanimates, he questions Stephen and Victor. When the two reveal that the "zombie disease" is airborne, he is furious. He later accompanies William, and two new men, Alex and Michael, on a trip to recover Caleb's body. When they return, he is told that William and his people can stay, and tells them of the good news.

He is present when Danny opens the gate, gets bit, and let's zombies into the town. He tries to help people evacuate when they realize there are too many to fight off. He goes with Ron, Zach, and Morgan to get cars so they can help people get out. He sees many of the Puslinch survivors get eaten, and sheds a few tears. He drives back and tells Morgan and Zach to meet him at the school.

He leaves with Megan and Cleo and arrives at the school after Zach, Morgan, and the people they were with. He notices the absence of Ron, William, Hannah, and Quin, but sees them pull up, and becomes happy. He notices Jian in the distance, and is shocked when Megan puts him down.

Theo is a medium-height, muscular man. He usually wears very bland clothes, such as plain T-shirts and jeans. He is very tough looking, with very frizzy, dirty medium-short brown hair, a bit of stubble, and a rough complexion. He seems to be in his mid 30's, and is fit for his age, and the zombie world. His eyes are a smokey blue color, and he has a scar running down the back of his neck.

At first, Theo is seen to be very trusting of people, as when he meets the group of survivors in Hamilton, despite him being shot by one of them. Later on, though, he is seen to be more weary of strangers, as seen when he first meets Victor's group. He doesn't immediately settle in, but over time seemingly becomes part of the group. Theo is also seen to be somewhat forgiving, seen when he lets Douglas live, despite him threatening to kill Tyreese, Ron, and himself.

Over time, as the leader of the group, Theo is seen to become more fit to be leader, and tries to make the right calls for the group. He is usually friendly to people, especially ones that he likes or that he knows are good people, but even if he doesn't like them, he tries to be nice. Theo is generally a good warrior, and is strangely fit for the apocalyptic world he recently entered.

Theo is capable of many things, especially handling firearms. His specialty is handguns, but he seems to be able to use most types of guns, except snipers, as seen in Chapter 3 of WotU. He is also decent with melee weapons, but prefers to be able to use a gun.

Wake of the Undead

Theo is the main character in Wake of the Undead. He first appears in chapter one on the side of a Hamilton, Ontario highway, and doesn't know who he is. He later meets a group of survivors and helps take the school. He survives the school attack and joins Victor's group in Puslinch.

Theo will appear in the game Star Smashers 2 as an unlockable character, and the sole representative of the Wake of the Undead series.

For a full list of quotes go to: Theodore Thomas/Quotes

These are all of Theo's quotes from Wake of the Undead in order.

“No...no, you live. But next time you selfishly pull a gun on anyone, anyone, I won't give you anymore mercy.”
— Theo to Douglas, Chapter 6

“I know I heard something!”
— Theo to the group, Chapter 7

“He couldn't of gotten far, if he did, then there's no hope. We've lost others.”
— Theo to the group about James, Chapter 12

“It's alright. But we need to have a word with Victor, I think he's hiding something from us.”
— Theo to Tyreese, Chapter 13

“I know it, I heard them. You can help us deal with them, or just sit back and let them run around in your society, that's your choice.”
— Theo to Morgan, Drake, and B, Chapter 14

“What is this? Why the hell are you keeping zombies here!?”
— Theo to Victor, Chapter 14

Ron and Theo have been seen to have a close friendship, despite Ron being the one that shot Theo. Ever since Douglas' supposed death, Ron has been a very loyal right-hand man to Theo. They seem to work well in tight situations, and are a very good pair of warriors. It is possible their bond has been growing due to Ron saving Theo's life when Douglas tried to kill him.

Douglas was initially an ally to Theo, but after Douglas tried to kill him, and almost succeeded, they became enemies. Theo shot Douglas' back, and Douglas showed pride in seeing Theo become as ruthless as him.

Tyreese seems to be one of Theo's right-hand men. Despite the lack of communication between them, Tyreese is shown to be almost as loyal as Ron, and usually accompanies Theo on his missions.

Zach is another member if Theo's group that often accompanies him on missions. In Chapter 4 Zach seems to know about Theo's past, as he says he knows who Theo is and why he was on the road in Chapter 1.

Morgan and Theo first met at the abandoned shack at the end of Amnesia. Since his arrival in Puslinch, him and Morgan seem to have become allies, and she accompanied him on his mission to get the vehicles from the school.

When Theo first arrived in Puslinch, Victor immediately recognized him from the picture he found months earlier. He seems to be weary of Theo's presence there, and it is possibly a rivalry will spark between the two.

Theo and Megan seem to have a good friendship. They haven't had much interaction, but the two seem to have decent chemistry. Theo felt sorry for Megan when her grandfather, Jian, was bit and stayed behind.

Theo is one of the first people to volunteer to search for James. He is distraught after coming back from searching empty handed twice. He appears to be very saddened by the death of James. 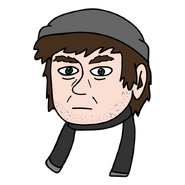 Christmas Mugshot by Arend (t∣b∣c)
Add a photo to this gallery
Retrieved from "https://fantendo.fandom.com/wiki/Theodore_Thomas?oldid=3210558"
Community content is available under CC-BY-SA unless otherwise noted.