The Threat's Heart is a name given to a nameless creature that holds the Threat's heart, basically allowing her to live so long as her detached heart isn't attached to her body. When her heart is in the the hands of this creature, she can basically take any blow or attack and live through it. Unlike what is usually assumed when a heart is disconnected from a person, she is exactly the same without her heart in her body.

The creature that holds the Threat's heart has bat wings and the titular heart, which is purple and shiny, as well as being shaped like a cartoon heart instead of a more realistic one. There is black stuff all over it, which would normally suggest corruption but this is apparently not the case. There is also four points with three floating lights around each point, illuminating dark areas with purple light. 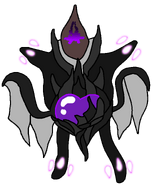