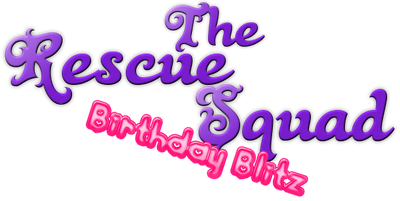 It has been stated that while Super Mario and the Underworld Trials has a more serious plot, The Rescue Squad: Birthday Blitz focuses on more lighthearted humor.

The game opens in Bowser's Castle, where Bowser Jr. is seen sleeping in his bed. He wakes up when his phone begins ringing. He picks it up and sees that he had recieved a message from Ruby, the ruler of the Underworld, saying that she needs him and the rest of the "Rescue Sqaud" to come to the Underworld. Hopping into his Jr. Clown Car, Bowser Jr. flies out the window is seen telling the others to come by to the Underworld Teleporter (he drops a note in Toad and Toadette's house, and throws a brick with a message taped to it through Waluigi's window), and they all eventually meet up. Using the teleporter, they travel from the Mushroom Kingdom to the Underworld.

Once they arrive, Ruby and Pearl greet the Rescue Squad, happy for their return. After the Underworld ruler tells Pearl that she should go upstairs and play some games, Ruby begins explaining why the Rescue Squad was brought here; today is Pearl's birthday, and she wants to send them to the neighboring kingdoms and invite the royal families to the party. Waluigi is reluctant to help, but ends up going through with the plan anyway after Toad, Toadette, and Bowser Jr. beg him to come along. Ruby does mention, however, that the train used to get from kingdom to kingdom is udner repairs; in the meantime, she suggests to head into the Underworld Trials and invite Belle, Brooke, and Brittany from Honeyhive Elementary and Sarina from Thundervolt Castle.

Once the train is fixed however, the Rescue Squad catches sight of a group of characters in party hats, named the Party Planners, standing with an Underworlder, around Pearl's age. They overhear that this girl, named Diamond, is planning to collect the most extravagant items from each of the Kingdoms and use them for her birthday party. They hide as the Party Planners head to the now-repaired train, and decided to try and beat them to the items to make sure Pearl has the best birthday party ever. The then board the next train and head off.

Much like Super Mario and the Underworld Trials, The Rescue Squad: Birthday Blitz focuses on exploration on a 3D plane similar to Super Mario 64 and Super Mario Odyssey. The player will explore large, expansive areas to collect Party Stars. Unlike the original game though, this game takes more inspiration from Super Mario Odyssey, where there are many more items to collect and the player is not booted out of the area upon collecting one. The game is also uses a combination between  Super Mario 64, Super Mario Sunshine, and the Galaxy games' usage of a hub world and the lack of one in Super Mario Odyssey; the Rescue Squad will use a train to travel to most of the levels, which while somewhat limited, still ahs many interactable things in it. This was based off of the Excess Express from Paper Mario: The Thousand-Year Door.

Like Super Mario Odyssey, every kingdom has two types of Coins; global yellow Coins that are found in every kingdom and regional purple Coins that are specific to each kingdom. Like Super Mario and the Underworld Trials, these can be purchased in the kingdoms' various shops to buy birthday presents for Pearl. Power-ups also return, and are utilized in a similar way to Super Mario 3D World and Super Mario and the Underworld Trials, which provide temporary abilities that can be used to advance the game or help defeat enemies.

There are 15 total locations that the Rescue Squad can explore, most of which are referred to as "Kingdoms". Much like Super Mario Odyssey, every Kingdom has a specific theme, with some being seen in previous Mario games with others being new. Diamond and the Party Planners are after various items in the majority of these locales, all of which tie into her birthday party.

Using Coins and Regional Coins, players are able to buy birthday presents from the various shops around the Kingdoms to give to Pearl. Talking to Ruby will allow her to use her magic to wrap any presents the player has. Many of these presents make references to other Mario games.

Retrieved from "https://fantendo.fandom.com/wiki/The_Rescue_Squad:_Birthday_Blitz?oldid=2667601"
Community content is available under CC-BY-SA unless otherwise noted.