Fantendo - Game Ideas & More
Register
Don't have an account?
Sign In
Advertisement
in: Free to use Characters, What is the New Fantendoverse?, Original Characters,
and 8 more

The Oracle (original name Quintera Axioma) is an Ascarian from the planet Tuibeitu. The Oracle is a self-professed cosmic deity with the ability to see into the future, although in actuality she is a liar and is feeding off the thought patterns of the fetus of an future-seeing animal. She was created by Exotoro (t∣b∣c) as the dark counterpart to The Seer as well as being a character that could tell the future in an alternate way compared to the The Seer.

The Oracle managed to find a key to immortality, allowing her to live as long as she wanted. Since she was greedy and did not want to share with the rest of her race, she instead opted for the lie that she was a goddess. As a way to prove to her race that she had power beyond her immortality, she sought out the child of a creature known as Necromite and embedded it into her cortex bulb, allowing them to absorb their brainwaves. The Necromites are known for the ability to see into the future, allowing them to make educated decisions for nesting and hunting. However, these futures are often bleak and are biased towards death, destruction, and bad things happening.

The Oracle is a Ascarian, with blue cold skin and light blue teeth. She extrudes out chilly breath from her mouth. She has light purple hair with darker purple highlights. Her hair covers her eyes. She has four horns that cling to her head, as well as a giant cortex bulb with a crimson color. She has two bug-like antennae in the center of her head which bend and straight depending on her mood. She wears black skimpy clothes that match the colors of her skin markings. She has a flower-like bud on the back of her, the very center of which has a poisonous stinger. She can ensnare her foes into the bud and pierce them with the stinger. She also wears chained cuffs, which she utilizes in combat.

The Oracle comes from a race of creatures that evolved as predators that fed off the brain waves off creatures technically superior to them and one that poisoned their prey through deceptive, flower-like tails. As such, she tends to be rather deceptive and cunning, playing into traits that her species has mostly forgotten about, with many using these once-predatory traits to share information with each other and to carry items. The Oracle is ancient and has more pronounced features compared to her fellow species, who have evolved over the 2000 years she has been alive. In comparison, the Ascarians tend to only live 25 years at most.

The Oracle has been jealous of the immortality and importance of gods, and has decided to dupe her way into being considered one. Using the power of the Necromite fetus in her cortex bulb, she has been able to predict the future while keeping it immortal and helpless as she feeds off it's brainwaves. She is a compulsive liar, having held one lies up for centuries now, although she does not lie when offered to use her powers. She has been able to get more powers along the way, such as the ability to channel Abyssal and levitate.

The Oracle likes to feel needed and is responsible for foretelling of prophecy in the dark zone of the New Fantendoverse. Those who want to know the future are told to see the Oracle, as she will tell you freely as opposed to The Seer. While she likes to stay at her temple where her and her harem reside, she will occasionally come to other planets if she can get something done there.

The Oracle is primarily immortal through a method that has yet to be explained and can see into the future thanks to the fetus of the Necromite she has captured in her cortex bulb. The Oracle can also inflict poison naturally through her stinger, although this requires her to snatch opponents with her bud. The cortex bulb also allows her to absorb information from whatever is inside it. She also has the ability to levitate.

The Oracle also possesses the ability to channel Abyssal, the antithesis to Aura. The Abyss that the Oracle pulls from actually comes from an abstract concept of her age, as she has thousands of phantom ages compared to her physical age of 20. The older she gets, the more power she will be able to expend from her Abyssal power. Her Abyssal takes on a blue color. 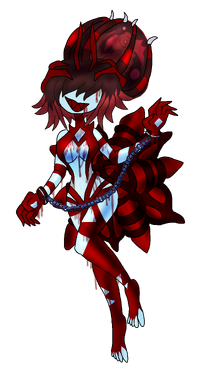 Dark Abyss Oracle is the name of a Abyssal transformation that The Oracle can take on while on the planet Xicicle, which is between what is known as the Spirit Universe and the Wasteland. Xicicle is a powerful Abyssal conduit for The Oracle as it exists between the space of dead and forgotten, two places where Abyssal can be pulled from the easiest. While in this form, The Oracle becomes inundated with non-stop sharp pain sensations but can pull from Abyss as long as she can stand it.

Dark Abyss Oracle takes on a new crimson color with her clothes, marking, cortex bulb, horns, and bud. Their skin also pales in comparison, and her teeth takes on a crimson color. Her cuffs remain blue. Her hair becomes a bloodsoaked color as well, as blood literally bleeds off her. This transformation does not effect the fetus trapped inside her cortex bulb. Blood drips down across her whole body, even from her outfit which appears to be dyed excessively with the bleed.

Dark Abyss Oracle is able to use her Abyss powers without pulling from her phantom ages, which is a limited supply of power despite the decades underneath her. She also gains additional power to her existing techniques, allowing her to match even powerful Aura users in power and can overpower them easily. Her Blood Bubble ability especially becomes powerful due to her immense bleeding. She does not kill in this form. Due to it's requirements of needing to be near a good source of Abyssal, this is a rarely used form.

She has yet to use this form so far in canon. It mostly exists due to her being an Abyssal user who has been to Xicicle, which fulfills a requirement for activation.

None available as of currently.