The Legend of Zelda: War of the Triforce is the newest game in the Zelda series, intended to build upon Breath of the Wild's formula while bringing back some old Zelda gameplay features. 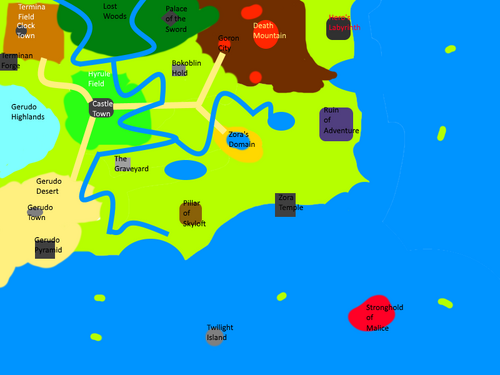 War of the Triforce takes place a few centuries after Skyward Sword. Hyrule is a relatively new kingdom, gaining control of lands around the world thanks to the Triforce and its ability to unite people under a single cause. However, one neighboring kingdom known as Termina would grow jealous of the Triforce's power, and thus declared war, seeking to claim it for themselves.

In the midst of all of this, Princess Zelda has foreseen some troubling visions regarding the ancient foe defeated by the Chosen Hero long ago, and that he could be behind the war. Thus, she enlists the help of her childhood friend Link, her bodyguard Impa, and even a mischievous Skull Kid to stop the conflict before it leads to the visions becoming a reality.

The Twili and the Mask

Although the Dark Interlopers were banished from Hyrule long ago, their descendants, the Twili, have a minor presence in Hyrule. Here, they study the magic of the land, having abandoned their desire to claim the Triforce. However, with rumors going around about the loyalists of Demise on the move again, they've decided to make a weapon of sorts. The leader of this tribe of Twili, known as Majora, sought to make a weapon capable of eradicating Demise's followers, in the form of a mask. If Link, Zelda, and the others seek to stop the darkness encroaching on Hyrule, they'll need to seek the help of Majora and his allies.

The Darkening of Hyrule

As the war between Hyrule and Termina rages on, Demise's followers work to resurrect him. This involves tainting certain areas of Hyrule with his foul magic, and it's up to Link and his allies to cleanse these areas.

Gameplay-wise, tainted regions of Hyrule are full of mutated monsters that are far more powerful than their normal variants, as well as monsters unique to these regions. These areas can be transformed back into their original states, but it won't be permanent. Over time, areas can fall to Demise's corruption, and this mechanic will happen more frequently as you progress through the game.

Throughout the journey, Link must head to several regions of Hyrule and ensure that the problems in those regions are dealt with. These storylines can be done in any order.

The Hyrule Field storyline primarily revolves around defending the home front while also delving into the catacombs beneath the castle, and eventually discovering the existence of dark happenings within Hyrule.

This storyline revolves around assisting the other races of Hyrule in dealing with problems they've found due to the war.

The Hero's Journey storyline revolves around investigating ancient ruins near the Master Sword's grounds, as well as putting a stop to a shadowy force.

The Terminan War storyline focuses a lot more on the conflict between Hyrule and Termina directly.

These dungeons don't fit into any storylines.

End of the War

As Demise's spirit falls, it unleashes the last of its energies into Majora's Mask, twisting Majora's mind and transforming him into a dark entity full of incredible power. Spewing out phrases of insanity, twisted magic, and tearing apart the fabric of the world, Link and his allies must stop the mask.

Once Majora is defeated, the mask ends up creating a gateway to a parallel reality, before heading inside. At this point, the Terminan soldiers present at the Stronghold of Malice decide to start a new life for Termina there, believing that it's their duty to prevent Majora from consuming Hyrule. They wish Zelda good luck in ruling over the kingdom, and prepare to act as the eternal jailors of the mask. Of course, over the years, they'd forget about their duty and Majora's Mask would remain a powerless artifact. Until the events that occured thousands of years later...

War of the Triforce builds on the critically-acclaimed formula developed by Breath of the Wild. The player is free to explore all of Hyrule as they see fit, and even go after countless optional sidequests and areas to explore. Shrines dot Hyrule, having been built by the residents of Skyloft when they ventured to the surface, with Link capable of exploring them and conquering their challenges. Hyrule itself is more than double its size in Breath of the Wild, with areas being consumed by war as well as massive cities. A large ocean also exists too, making Hyrule more immersive than ever.

Unlike Breath of the Wild's system, dungeons are being done differently in War of the Triforce. The game has thirteen main dungeons, with one of them being the "final boss" dungeon, so to speak. The other twelve are divided into four storylines, which have you do three dungeons in a specific order. In a way, each storyline is like a smaller Zelda game. Yet, you're still free to choose which storylines you want to go for, as well as whether or not to go for the last dungeon right away.

Dungeons themselves are more like the traditional labyrinths seen in previous Zelda games, with locked doors, darkened rooms, interesting puzzles, and a boss fight at the end. Although certain items aren't required to progress in dungeons anymore, there are still complex puzzles that require certain items to be brought in from outside the dungeon, like boomerangs.

A new feature being added is multiplayer. Link, Zelda, Impa, and the Skull Kid are all playable characters, with each player capable of running around Hyrule together. Packs of enemies will also scale accordingly to how many players you have in the game, and dungeons are also designed to be accomplishable with either a single person, or multiple people.

Speaking of dungeons, there is an additional fourteenth dungeon that's completely optional, that can only be done in multiplayer. Players will have to work together to solve these extra-difficult puzzles. However, if players don't want to work together, they can also fight one-another, with the game even having arenas that offer rewards for the stronger fighter.

The cooking system has evolved and become the Crafting system. Essentially, certain items can be combined to produce more powerful items, though you may need to be near things like cooking pots, fire, and anvils to make certain items. Cooking is also included as part of this system, and has been expanded upon to include more interesting food.

Crafting can also be used to create weapons, shields, bows, arrows, armor, and various tools. These can also be sold for Rupees. Equipment can also be repaired through the crafting system, and bags can also be crafted to store more items, replacing the Korok Seed hunting from Breath of the Wild.

Fishing returns after a long absence. This time, you can fish in any body of water, with different areas of Hyrule having different fish native to them. Various types of fishing rods also exist, as well as multiple kinds of bait.

Combat has been revamped drastically. Each weapon type now has different special moves associated with it, as well as new mechanics such as applying poisons to weapons, unarmed combat, a bleed mechanic, and breaking enemy weapons. Dual wielding also exists, though you are unable to block attacks when wielding two one-handed weapons.

With the Sheikah not existing yet in the timeline, the Sheikah Slate has been replaced with the Loftian Tablet, a device made by one of the original settlers of Hyrule who hailed from Skyloft. This device is capable of creating bombs, moving magnetic objects, freezing objects in time, cooling water into an icy form, teleporting to travel points across Hyrule, and accessing a database of information on Hyrule's denizens and objects. This device can also be considered the "template" for the Sheikah Slate that would be seen later in the future.

In addition, some functions that weren't present on the Sheikah Slate exist on the Loftian Tablet, such as access to magic in a similar vein to Zelda II.

Magic is a new mechanic that is accessed via the Loftian Tablet. Throughout Hyrule, special Magic Shrines exist that are designed to teach you new spells. Magic consumes Magic Power, which comes from the Magic Meter.

All animals can be ridden, each with their own advantages. For example, horses move the fastest, bears can claw monsters, rams can push heavy boulders and objects, deers can turn better, and stalhorses can scare away enemies. Yet, one kind of rideable animal is incredibly interesting.

After completing a lengthy sidequest, Loftwings can be tamed. They allow you to fly through Hyrule's skies. Flight has been revamped from its appearance in Skyward Sword, taking cues from Star Fox's all-range mode. More techniques exist, and aerial combat is a possibility, with enemies roaming Hyrule's skies.

Yet, flight comes with a penalty. Loftwings are much slower than most rideable creatures, but they get the advantage of being able to go over steep mountains.

Unlike Breath of the Wild, Castle Town is a fully-explorable city full of NPCs, services like banks for storing money and items, sidequests, and more. Get used to Castle Town, for it'll be useful in your journeys.

One issue with Breath of the Wild was that as the game goes on, it gets easier. To remedy this, Blood Moons will happen more frequently as you complete in-game objectives.

Another difficulty change comes in the form of frequent respawning. Unlike in Breath of the Wild when enemies would only respawn during a Blood Moon, they now respawn after several minutes of staying dead. Thus, Blood Moons have been revamped into a night where monster spawn rates are tripled, and they all deal double damage. This makes travelling during a Blood Moon extremely dangerous.

The game's difficulty in general has also been changed, with more enemy variety and an increased number of minibosses like Talus, Hinoxes, and Lynels in Hyrule.

After completing a sidequest in Castle Town, you can obtain an Ocarina. The Ocarina is capable of playing several helpful songs that can allow for some interesting interactions with NPCs and the environment. The Ocarina is bound to the Down button on the D-Pad.

amiibo continue to play the same role that they did in Breath of the Wild, by supplying items. Several new amiibo will be introduced for the new incarnations of Link, Zelda, Impa, Skull Kid, Majora, and Demise, as well as Moblin and Lynel amiibo.

Retrieved from "https://fantendo.fandom.com/wiki/The_Legend_of_Zelda:_War_of_the_Triforce?oldid=3059866"
Community content is available under CC-BY-SA unless otherwise noted.