The Legend of Zelda: Hero of Time' is an American romantic fantasy/adventure epic movie based on The Legend of Zelda video games produced by Nintendo. It is being Directed by Peter Jackson with a script written by Jackson, Guillermo Del Toro and Shigeru Miyamoto. The film stars Nicholas Hoult, Mia Wasikowska and Christopher Eccleston[1]. The story is based on the events of Ocarina of Time and Majora's Mask. It will be released in RealD 3D and IMAX 3D on December 15, 2017.

When a great evil awakens from it's slumber, a young boy must take arms and face up against an ultimate evil in order to save his childhood best friend, the kingdom of hyrule and the entire land of Atlas. 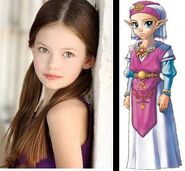 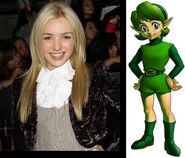 Peyton Roi List as Saria
Add a photo to this gallery

Warner Bros. Pictures acquired movie rights for the Zelda franchise in 2007 after the successful release of Twilight Princess. For many years, Nintendo had been interested in turning Zelda in a movie series. In June 2010, Warner took pitches from video game writers, comic book writers, screenwriters and directors in how to make a Zelda movie. Mac Walters, writer of the Mass Effect franchise, proposed an eight-hour epic that spanned from Link's childhood to his eventual crowning as King of Hyrule. Similarly, Grant Morrison proposed a story similar to that of Ocarina of Time.

Retrieved from "https://fantendo.fandom.com/wiki/The_Legend_of_Zelda:_Hero_of_Time?oldid=2068888"
Community content is available under CC-BY-SA unless otherwise noted.