Start a Wiki
The Great One is the fabled antagonist of Forgotten Unity. Merely mentioned in the first chapters of Out of Many, she takes a much more prominent role towards the end of the story, ultimately transforming into the almighty Megasoul. The Great One is defeated at the hands of Nick.

The Great One is a saddened gold-like being, weeping over what has been done to her in the past. Having an agenda to wipe pain and suffering away by creating a new unified race of humans, she lets nothing get in her way. Being affiliated with the Souless, many would consider The Great One evil, though keeping her true intentions in mind, that opinion can begin to sway.

In her Pure state, The Great One looks relatively harmless. Being a glowing teal orb with red-orange-eyes and usually seen with one purple tear flowing down, she can't do anything without manipulating free Soul Energy to form various shapes, most commonly hands. 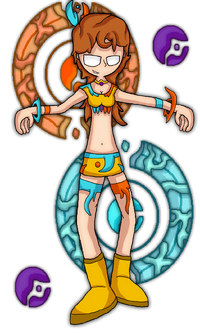 The Megasoul is another form The Great One is known to take on. Combining with Megan, The Great One transforms into a giant, using Megan's body as the vessel fueled by Souless power.

Retrieved from "https://fantendo.fandom.com/wiki/The_Great_One?oldid=1812935"
Community content is available under CC-BY-SA unless otherwise noted.