The Factor (因子 or Inshi in Japan) is a First Person Shooter being developed by GamerAvenue Co. for the PC and a yet to be known console. The game revolves around the fall of an organization named Raven Industries, of which had been a security company for 5 years, until they had retorted against a government action which nearly took away 2/3rds of Raven's funding, thus leading to a region changing event named The Surge.

The game takes place in the future where Technology had advanced greatly since our present day. The game focuses on the events which shook Raven Industries and destroyed it. Malcolm Leychester, CEO of Raven Industries, had been working on autonomous robots with efficient AI 7 years before the events of the game, making robots such as the Sentinel Alpha Drone, which had driven him to do this as a career along with his colleagues. 2 Years later, he'd established Raven Industries, a government funded military organization which used drones to protect civilians without any harm coming to human police in the North-Western regions of the globe and signed a deal with the government to give money to Raven to fund there creation of Raven Drones. The organization had successfully defended these regions of the world for 5 years, when an unknown criminal group had stolen 6 Sentinel Drones and illegally modified them to attack Civilians instead of criminals. Only about 10-20 civilians were killed in that incoddent and the robots were quickly dispatched. The government blamed raven for the incident, taking away two thirds of their funding along with a quarter of their labour force, which lead to The Surge, a military operation organized by Raven to retort against the government. The operation lasted for a week and had taken the lives of 10,000 civilians, along with most the government. (The remainder of the government had ran off and joined Rebel Groups) Civilians took hold of weapons imports and decided to avenge those lost in The Surge and attempted to lower the death rates of humans in the regions. The player is part of one of these groups and is part of the rebel clan that finally takes down Malcolm and Raven.

The game will work like a traditional FPS game, The player is equipped with a melee weapon and a primary weapon and is given certain goals during the Segment. The player starts at the hub and can choose to gather some "Allies" for the mission/segment which are controlled by AI. Weapons can also be enhanced if the player fits the requirements for it, The upgrades include slower cooldown periods between shots, more damage dealt per shot and ect. In the hub, you can also edit your loadout/your allies' loadout which gives an element of strategy to it. You can also collect other weapons as you go along in the game, these weapons are either dropped by enemies or given to you over the period of the game. A ranking system is also incorporated into the game with a unit named "Respect", Respect is gained each time the player kills an enemy/boss. If the player gets the required amount of "Respect", he/she can enhance his/her statistics and gain access to more weapons and privileges. Each rank uses true Military terms for them such as "Private" and "Captain".

The game's multiplayer mode will also work similar to that of most mainstream shooters. There will be two teams of players, one of Rebels and one of Raven Drones. The player's loadout applies to both the rebels and only Sentinel Drones. The rest of the drones, such as Scouter Drones, Pyro Drones and even Behemoth Drones have their own loadouts which are applied to certain weapons. (Such as Flamethrowers for Pyro Drones ect.) There will also be maps which are similar to that of the games' stages such as those which reflect certain scenarios such as the Segment 1 Prison ect. The respect system is also incorporated into Multiplayer, though is only limited to Stats and weapons.

Segments are The Factor's form of chapters in story mode. Each one of these segments has 3 Subsegments in it (Excluding the introduction) which link into a whole event-esque timeline.

The player is involved in a faction of rebels fighting against Raven to regain power over the cities (And is playable at this point on as "The Surge" serves as an intro level, who is accompanied with some particular rebels, notably Nagotchi Hikuromu, A rebel of a Japanese origin whom had gone to the North-East as a tourist until Raven blocked access to planes on-route to anywhere out of the countries Raven were operating in), destroying Raven drones in the process. At the end of this "Intro Stage" the player is shot in a blast by a powerful security drone named by Raven as the Behemoth Drone. That individual blast was enough to injure the player and put the player in a 4 Month coma.

The player wakes up from this 4 month coma in this segment under a stack of debris which had built up over time, the player manages to escape from the pile of leftovers from The Surge. Outside the pile, he finds his TAR-21 next to it, Damaged and out of ammunition. The player then resorts to using the Default knife as a weapon for defense. The player's objective is the same as that of the tutorial level, to get to Raven HQ. The enemies in this area are generally weak Scouter Drones or damaged Sentinel Drones, which roam the area still searching for Rebels. This segment is set on the roads of which the player had battled on during The Surge, now barren with several unfinished constructions in the area, several severely damaged Jeeps from the battle, fires and broken glass in some buildings. Some roads have fallen buildings blocking the path, which means the player must go around it on the buildings and bridges. Once the player has reached Raven HQ, he/she is greeted by Malcolm Leychester and two Sentinel Drones who attack and dispatch the player, Grabbing him/her by the arms. Malcolm then gives a speech on how he "Missed" the player and then orders the drones to transfer the player to a prison of which had been controlled by Raven after The Surge. The prison is fairly large, boasting many large rooms and corridors with Raven Drones. The player is in the bottom-most level of which has tight security and jail "Bars" replaced by lasers, though is freed because a Rebel had attached a bomb to a Sentinel Drone, which had been walking to the security panel, Thus blowing up the security panel and freeing the player. Several areas can be used for cover such as upturned tables in the cafeteria and corners. The player must climb the grates and get to the final floor to escape from the prison and head to the Rebel outpost. Most enemies here are Sentinel Drones and Scouter Drones (Of which now gang-attack the player), generally on the bottom floor. The player successfully escapes from this prison and the rebels whom had helped him escape steal an outdated Helicopter, grabbing the player and letting him escape the prison. At the rebel area (Which is now the Player's HUB), The player attempts to join a raid on Raven, he is stopped by another higher ranked rebel whom orders the player to complete a training course in order to have authority in the Rebel clan. The player must complete this course within 50 Seconds to pass the training course. Once the player does this, he is assigned to his first mission, to scout out and retrieve Raven weapon imports. The mission takes place, again on the streets and a particular warehouse. The player must advance through the street and find the warehouse, and take the imports back to the base. The Warehouse is in a fairly open area and the Warehouse itself is fairly large. Once the player sets a flare outside the warehouse to show that is the location to rebels, the player is caught by Raven Drones, Mainly Sentinel Drones and Pyro Drones. Some Rebels manage to get to the area to help the player defend from the groups of Raven Drones. The player is successful, and the Imports are successfully taken back to the Rebel Base. Once the Rebels get to base, the player is congratulated for the mission and the segment is concluded.

As you gain higher authority in the rebel ranks, there is another mission to be done, which is to disable the Raven factory lines which have been set underneath the grounds of the city in a certain facility. The player must roam around the city map and try to find the area which contains the entrance for the factory lines. The roads have more powerful enemies than they did before (Raven also patrol in vehicles now such as the Ravager and Enigma) and the streets are more damaged. The area is apparently hidden in an abandoned shopping mall. The stage is generally fairly open with upturned tables as weak cover. Raven Drones such as the Scouter and Sentinel appear also, some driving vehicles through glass panes to run over the player, thus further damaging the mall. The unit is hidden under a boutique in the mall on the lowermost floor, (Of which the player must find) and is ultimately destroyed. Once the player arrives back at the Rebel outpost, a boyfriend of a fellow rebel under the name of Ryan Myers is seen taking a USB out of a port on the Rebel PC. The player threatens him to drop the USB, but the man simply refuses to do so and tries to knock the player into a coma, Meyrs is successful and the player is knocked out, and doesn't remember any of the incoddent. The player then does a stealth mission to follow Myers' Ravager to the location of which it is set to go. The player must not be caught by Myer's headlights nor by Raven Drones. If a raven drone spot the player, The player's "Heat" will increase, once the heat is to a certain level, Myers will catch the player and supposedly kill him. If the stealth part is completed successfully, a cutscene will play of Myers getting an entrance to the park with permission from a Raven Drone. The player then follows him in and catches him going to the controls in the center of the park. The boss battle of the segment then starts, Myers is armed with a laser sighted M1911 and will attempt to shoot you as you attempt to sneak on him and do a melee attack. Once he has been sneaked upon, Myers and the player will engage in a melee battle. Once the battle is complete, the player will gouge his/her knife into Myers' heart, and pull it out by kicking Myers and making him fall to the ground. Thus after this, the player takes the USB and gets back to the base, thus completing the segment.

More to be announced

The Factor was given a glorious 10/10 by Purple Paw Gaming Monthly.

The game was praised for its storyline and its unique enemy; Malcolm Leychester, who founded Raven Industries with the intent of using his autonomous robots to protect civilians. He ultimately fell to evil when some of his creations were stolen by an unknown criminal group and reprogrammed to attack civilians, with Malcolm being blamed for the incident. 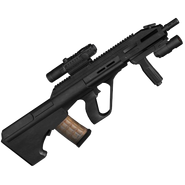 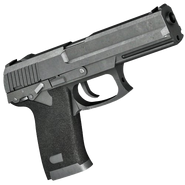 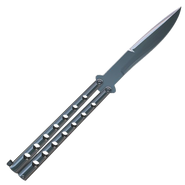 The Working Logo for The Factor 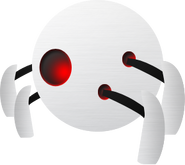 The official art for the Scouter Drone
Add a photo to this gallery
Retrieved from "https://fantendo.fandom.com/wiki/The_Factor?oldid=2347013"
Community content is available under CC-BY-SA unless otherwise noted.