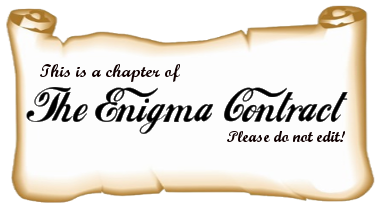 Mika Sho stands over two corpses, a bloodied knife hanging limply in her hands. Tears stream down her cheeks, as she cries with fear over the death of her friends.

She faintly hears a voice from behind her, "Congratulations, Ms. Mika." She spins around, faintly aware of her actions. The silver-haired man who offered up the Enigma Contract stands before her, though she still looks at the knife in her palm. "As per the contract details, you get a wish."

Silence hangs in the air between the two for minutes before something clicks within her mind. She drops the knife onto the ground, bouncing with a loud clang as it hits the stone ground. "I wish..."

Mika opens her eyes, and finds herself sitting in a small room. Lit dimly by a torch, she tries to make out her surroundings: a bale of hay rests in one corner, with various tools scattered around the ground, their heads all pointed around the room. "This..." she mutters before remembering. She pumps her fist in happiness. "Yes!" she exclaims.

With a cheerful smile, she creates a plume of flames in her palm, and throws it against the thick wooden door across the room. It quickly bursts into flames and she watches as the wood burns into splints, calculating behind her eyes.

Little did she know that there would be changes because of her actions.

January stops talking and looks to the five living people in front of her. Ella looks shocked, as does Ethan. Hama smirks happily at the revealing of Mika's nature, while Jon remains as silent as ever. "Well?" the youngest asks the four.

"How did you...?" Ella begins to ask, before trailing off as she loses her train of thought. January shrugs. "I picked up some clues here and there." she then taps her forehead. "I also have a great memory.

"Tell me something then." Umbra begins, his eyes still narrowed at the blade in front of him. "Did Mika frame me for murdering the others?"

January slowly nods. "Mika killed Jake and Koloro when they began to learn about her past." Ella gasps at the concept. January, finally lowering her sword, slowly hobbles towards Jake and Koloro's dead bodies, still laying against the wall. "I'm sure Leah must have noticed this when she inspected their bodies, but..." she slowly pulls the sheet off Koloro and lifts up her shirt a touch, revealing a large black spot where her heart was. Lowering Koloro's shirt, she does the same to Jake, revealing a similar black spot. "Mika burned their hearts."

Umbra slowly shakes his hands out, still clearly tense about having a sword held to his chest. Hama, beside him, shakes her head. "So tell me: what do we do now?"

January lowers her gaze. "One of us must kill the others and wish everyone back to life."

The others stay silent, all looking to the ground. None can guarantee that that is what they will wish for, each having their own reasons for signing the Enigma Contract. "Fine." January says coldly. "I get it." she turns to Ella, who avoids January's cold gaze. "I would have thought you would agree with me." she snaps before slipping away. Ella holds her arm and looks at the ground once more, before...

"What happens if no one wins?"

The question bursts from Ella's throat before she can think about it. "If we all commit mass-suicide then no one would win. He'd have to grant us all a wish!"

Hama crosses her arms. "Sounds like some Hunger Games bullshit. I'm better off with murdering you all."

January lifts her eyebrow. "Can we trust you'll wish us back to life?"

Hama sighs. "No one ever trusts me, but it'll be better than having more deaths weighing on my heart."

January holds out her sword, this time pointing to the ground, towards Hama, who quickly grabs it. Without a second thought, she quickly thrusts the blade through a shocked Jon who narrows his eyes in both pain and confusion, before closing them for good. Withdrawing the blade, she quickly sighs. "Man, I hated how he was so silent. I've been wanting to kill him since we met."

Ella chuckles and Hama smiles. "Let's get this over with." she looks to Ella. "Sorry darlin', you're next." Ella smiles, her eyes displaying sadness while her smile happiness, forever a yin and yang through death. As she thrusts the bloody blade into Ella's heart, Hama closes her eyes in sadness, mouthing three words that Ella understands.

Once the sword is removed from Ella's body and a squishy thud rings out ahead of her, she spins around. "Who's next?"

She hears a voice from behind her, "Congratulations, Ms. Hama." and spins around quickly.

The silver-haired man who offered up the Enigma Contract stands before her, and Hama drops the sword on the ground. "As per the contract details, you get a wish. I believe I know what it is already?"

Hama opens her eyes. She finds herself in the bedroom that she occupied the night before, while a part of the Enigma Contract. She slowly sits up in the bed, blanketed by comforters and other bed necessities. Jumping out of bed, she slowly sighs before exiting the room.

She slowly stumbles down the long, familiar, staircase, making her way towards the large, familiar, dining hall. Creaking open the door, she sees a number of happy faces. Ella notices her and sprints towards Hama, hugging her tightly as she spins around. Hama enjoys the feeling of Ella's embrace, and hugs her back. "You did it!" Ella says happily.

"Can someone explain what exactly happened?" the revived Jake says sleepily. He places his hand over his heart and coughs lightly, glaring at Mika who looks away sheepishly. "One minute I'm being tortured by Mika over there, the next I'm asleep in bed." Hama looks over Jake: he looks the same as before she muses in her mind, though recalls new details. He has a long scar under his chin - where his throat was slit before, and a red ring of sandpaper-like skin around it.

"Simple. I won." Hama says, still her cocky self. She scratches the back of her hand, which rings out in pain, and winces. A tattoo now rests where she scratches: a lock. She ignores it for the moment with a shrug.

Ella fills in the missing details. "Hama killed the survivors in order to revive everyone else." Hama notices a few missing details. I actually wished for Ella to be alive and for her to get a wish. But I digress.

Jake and Koloro, though, quickly absorb the information before turning to Mika. "Now, I believe you owe us something." Koloro says to Mika, who steps back in fear. "After all, you did torture and kill us. It's not often when someone comes back to life after what you did to us."

"Heh heh. Yeah.... sorry." Mika says, before fleeing from the room. With playful, yet sadistic, smiles, Jake and Koloro chase after her, the door slamming behind them. Ella and Hama both share a laugh at Mika's misfortune, though the former has some sympathy towards her.

"Hey, let's eat!" Leah says with a smile, coming into the room with a large plate of snacks.

The silver-haired man watches the twelve participants from a television set. Jake, Ella, Ethan, Leah, Taylor, Jon, Umbra, Guaptain, Koloro, January, Mika and Hama. Mika's arms are bound behind her back with rope, as she sits in the corner for punishment, but the others eat snacks happily.

He looks at the tattoo on his own hand - a golden padlock - and smiles. Those who are affected by his powers are given the padlock symbol, which only those he affected can view.

On another television screen to his left, he sees another person walking through a hallway. He raises an eyebrow at the sight, before snapping his fingers. "I believe it may be time for us to make our leave." he says to himself, as the monitors disappear. Once more he snaps his fingers, this time turning off the lights.

"Lights out!" he exclaims, as he fades from the room.

"Hmm?" she replies, with food still in her mouth.

"I'm not quite sure, but he seemed awfully familiar."

Yeah, I got the same vibe. Hama thinks. "You know who he reminded me of?"

Jake interrupts them. "You know, I've had enough excitement for a lifetime. I'm only 16 and I've almost died a hundred times now."

Hama puts a smile on her face, though still thinks about the silver-haired man behind it. Just who - or what - are you?

Retrieved from "https://fantendo.fandom.com/wiki/The_Enigma_Contract/Chapter_10?oldid=2040951"
Community content is available under CC-BY-SA unless otherwise noted.