View source
“Ultimate power will be mine, and my insolent brother will be no more...”
— The Enemy, Initiation

Due to his implications in the Fantendoverse, The Enemy is a recurring character in Fantendo crossovers mostly as a main antagonist.

The Enemy created the Fantendoverse with his twin brother The Fan and then created the Skærsilden, considered as the Dark opposite of the Fantendoverse, also called Darktendoverse or Dumbtendo. As The Enemy choose to destroy the Fantendoverse, he and The Fan started a war against each other, assembling Fantendo users to fight for them. At the end of Balance Oblivion, He got the Ultimate Power as did his brother, giving him a new form called "The Almighty Enemy, Form 2". Unlike The Fan's angelic transformation, The Enemy's new form resembled some kind of demon.

When a Fracture appears in time and space, The Fan and The Enemy immediately blame each other for the creation of it. Their fight about it release The Mistake, the two brothers then chase him but The Mistake disappears caught by a gigantic hand. The Fissure then became The Catalyst, breaking the whole Fantendoverse with no way to fix it. In front of the end of their universe, The Fan and The Enemy both come to an understanding. Order and Chaos are part of this same balance that rules the Universe, and both of them need to work in harmony to maintain the universe. They finally decided to recreate the Fantendoverse together, calling it the New Fantendoverse.

After the Shattering, he recreated the Fantendoverse, albeit with some changes, with his brother The Fan. This however, brought the wrath of The Threat. The two opposing sides would then engage in a million year war. At some point, The Fan and The Enemy would learn how to create beings that descended gods from The Other, creating beings known as The Descenders. These were created to try and descend The Threat by force, causing The Other to step in and mess with their memory and sealed away The Descenders on various planets.

Millions of years have since passed and the two reverted their names back to the classics. The destruction of Zeon sends Unten to Earth. After learning of Unten's descension ability, The Fan and The Enemy begin to create Beorn Hallows in a effort to create more Beorns, although these are unsuccessful. The war between The Fan, The Enemy and The Threat then reaches a peak with The Threat now managing to infiltrate Earth to an extent seen as dangerous, which causes them to plot to steal The Threat's User Crystal. Using an unwitting Rachel and Sam to steal it as well as other shady practices, the whole thing goes awry when Sam puts in the wrong User Crystal, making Kolob The Threat's new domain, giving her complete control over The New Fantendoverse.

The main villain. Appears as the final boss in The Fan Commeth and one of the main characters in The Enemy Commeth. Appears in many more games through the series as well.

Appears as a main antagonist in most games/fics.

He creates two aspects of himself, Alrarl and Ektaz who tether themselves to Aeo.

He is the main antagionist and melts with Mo and Jo  to create the final boss. He, alone, is also fought.

One of the main antagonists. He melts with Sephiroth to create a more powerful being.

The Enemy appears as an ally in a number of episodes, as he made a bet with the Black God on which of the teams would be most successful and he attempts to assist those teams so he can win the bet.

The Enemy appears as a supporting character in Dark Woods III: The Plague Returns, thought plays an important role in it. After the Shattering The Enemy and The Order created a brand new universe that overlapped with the universe of The Threat. The Enemy found out about the Dark Woods which was yet unclaimed by anyone and was in the middle of the overlapping universes. The Enemy negotiated with Ashley to bring back Plague Master so he could rule the dimension in cooperation with The Enemy, although he told Ashley that her father was needed to keep the Chaos and Order in balance.

The Enemy in his cloak.

Along with The Fan, as in Fantendo Prophecy. 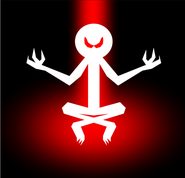 The Enemy's VS in Lethal Combat. 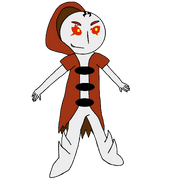 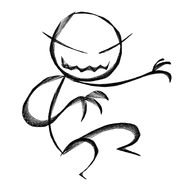 The Enemy (As depicted by Sorastitch) 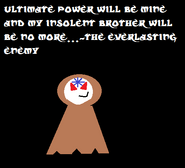 a picture of the enemy made by meme the fox4

As he appears in Fantendo Smash Bros. Shattered.

The Fan in Dark Woods 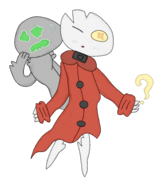 The Enemy from Fantendo - Zenith