Start a Wiki
The Elemental Labrynith which is also known as Adventure Mode: The Elemental Labrynith in game, is a single player mode in Super Smash Bros. Galactic Battle. Similar to both World of Light, and The Subspace Emissary, the mode features a giant map of various worlds to explore, while also featuring cinematic cutscenes that the player can view featuring the characters in question.

Every character in the Base Roster is present within The Elemental Labrynith, both in cutscenes and gameplay sections, with the mode being considered one of the easiest, but longest ways to acquire the unlockable fighters.

Similar to both The Subspace Emissary and World of Light, The Galactic Battle features a navigatable world map. The map can be explored by the fighters, which is rendered in 2D, similar to the previous Adventure Modes.  Players explore levels in platforming based on various games such as Super Mario and Kirby, which are all rendered in 3D, similar to Subspace. Also similar to Subspace, various puzzles will appear in the levels, allowing players to be able to challenge themselves with new ways to enter/exit levels. New to Adventure Mode are elements of platforming based on the style popularized by both Metroid and Castlevania that is known as the Metroidvania style, allowing players to return to certain areas that they feel the need to. Players run through the areas taking down various enemies as they make their way towards the end of the levels. Treasure Chests are also found throughout the mode, similar to Subspace, with many elements from the mode returning.

The story begins with a fight taking place within the Rest Area from Smash 4, where Mario is seen taking on Bowser, while a number of fighters are seen in the area, crowding around in the booths surrounding the area. This is revealed to be the entire base roster of the game. Master Hand and Crazy Hand are seen sitting on thrones, watching the fight to determine who the winner is.

Mario then takes an opportunity to grab a Smash Ball, and using it, transforms into a T-Rex with the help of Cappy, defeating Bowser. Mario is then declared the winner as various other fighters, notably Luigi, Peach, Daisy, Rosalina & Luma, and Pauline are all seen congratulating Mario on his victory. Meanwhile, Bowser is seen being picked up by the villains of the roster, disappointed in Bowser's loss.

The two sides end up celebrating the victory as a whole, while Master Hand and Crazy Hand approach them, wishing to congratulate all of the fighters as a whole for their efforts in the tournament. Before Master Hand can give Mario his trophy, a blast of fire knocks the trophy away, causing a flaming hole to appear within the Rest Area.

The Hands along with the Fighters all turn around to see a mystical humanoid being of fire, simply known as Hearth. Master Hand, furious at yet another attempt to take over his creations, attempts to charge forward at Hearth. Hearth instantly vaporizes Master Hand with a fireball, placing him under her control. A shot of ice then appears, which Hearth narrowly dodges. This is revealed to be coming from a humanoid being of ice known as Floe. In an attempt to avenge Master Hand, Crazy Hand charges forward to attack Floe but is frozen by one of Floe's ice beams.

Hearth and Floe then turn their attention to each other, attempting to eliminate the other one by any means possible. This begins to turn into a three-way fight, as another being of electricity known as Amperage appears, and begins launching strikes of lightning towards the two beings. Furious at having their clash interrupted, Hearth and Floe each turn their attention towards Amperage, as the fighters all begin to look on in horror at the events that are unfolding.

One of the fighters, Balder begins to realize that there may be something more to the current clash and begins to think of an idea. Balder then turns his attention to Medusa and begins to whisper a plan. Medusa begins to grin, and the two villains sneak off to gather the other villains present for a meeting while the heroes are all distracted.

As the three deities begin to launch even bigger attacks, they are interrupted by another being, this time launching gusts of wind. The being revealing themselves to be Boreas, the Lord of Wind. Boreas then joins in with the fight, attempting to bring the others down via a tornado.

While the villains are meeting, two more deities, known as Alluvium, and Pura, have joined the battle between the other deities, each with both Earth and Water attacks. By this point, all of the other fighters have begun to fight back the beams.

Sensing the opportunity, Balder commands the villains to charge forward and attack the heroes, allowing them all to be vaporized as they attempt to fight back the beams from the deities.

Cappy appears within Mario's hat and suggests that the duo escapes from the chaos by possessing a nearby Warp Pipe. Along the way, Mario runs into Fox, Link, Samus, Pikachu, and Kirby who all follow Mario into the Warp Pipe as the others are being attacked. Mario tosses Cappy onto the Warp Pipe and encourages the five other fighters to hop in. Mario and Cappy then vanish with the Warp Pipe before the beams approach and cause a massive explosion that affects the Universe once more.

The six heroes return to the world from their temporary escape, only to find themselves in a deserted plain. The Rest Area is shown to be nearby but is now in ruins. Mario, Link, Samus, Kirby, Fox, and Pikachu all run towards the Rest Area, in the hope of seeing that their friends had managed to survive the explosion. The ruined Rest Area is then shown to have six doors, each one with auras of the elements leaking out of the doors.

The six fighters decide to split up and explore the doors, hoping to find the whereabouts of the missing fighters, as well as the missing Master Hand and Crazy Hand.

The Skill Tree returns from Ultimate's World of Light, this time with new skills to be used in the game. As with Ultimate, Skill Spheres are used as currency for the Skill Tree.

Similar to the Subspace Emissary, there are many different stages for the player to explore. Similar to Subspace, a set amount of characters are allowed to explore the stages, with the player being able to select their characters if they choose to explore the level once more. Many stages are exclusive to the mode, and cannot be used in regular gameplay. Several stages are revisited and are labeled with a 'II' to indicate the differences. Due to the number of stages with 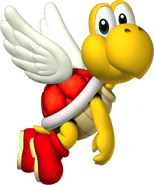 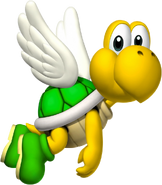 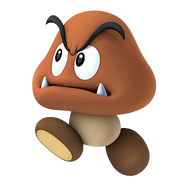 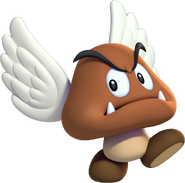 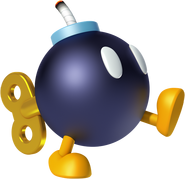 Bob-omb
Add a photo to this gallery 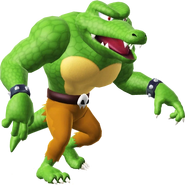 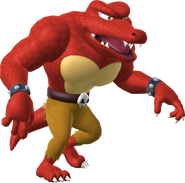 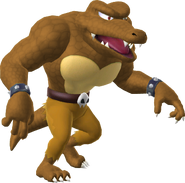 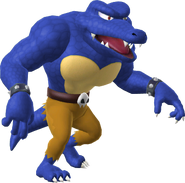 Kritter (Blue)
Add a photo to this gallery

There are six main realms within the Elemental Labyrinth, each one being based on the elemental deities that control each of the realms. A seventh realm exists under the name of the Labyrinth which is a culmination of all six of the main realms after each of the deities is defeated. Much like both World of Light, and the Subspace Emissary, there are multiple sub-areas that can be explored, often featuring a captured fighter. Each realm, save for the seventh and final one starts out with one fighter that has avoided capture.

The Fire Realm is the first realm that is explored within Adventure Mode. As the name implies, the realm is based around fire and features locations often associated with fire, such as volcanoes, deserts, and well-known locations such as Bowser's Castle. Hearth is the final boss of the realm, and Mario is always the first fighter to be used in the Realm.

The Ice Realm is the second realm that is explored within Adventure Mode. As the name implies, the realm is based around ice and features locations often associated with ice, such as arctic ice caps, snowy locations, and places such as Nifli Castle. Floe is the final boss of the realm, and

Many different bosses from the Super Smash Bros. Series return, alongside new original bosses, and iconic bosses from many different video games. Defeating a boss will result in their Spirits being able to be collected and equipped. Various mini-bosses appear throughout the mode, mostly comprising of fighters. 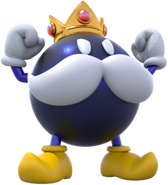 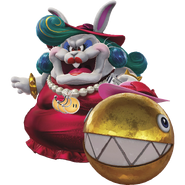 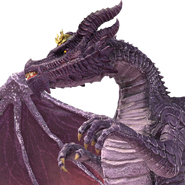 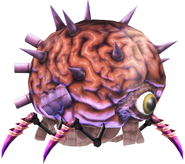 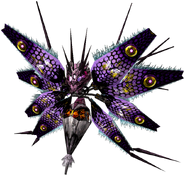 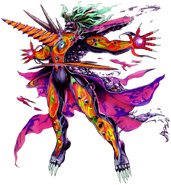 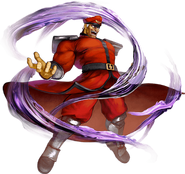 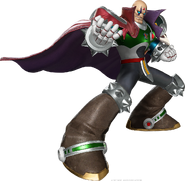 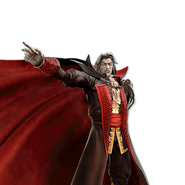 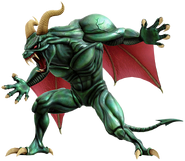 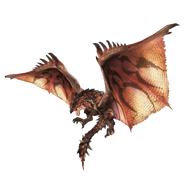 Rathalos
Add a photo to this gallery

Mini-Bosses are fought in normal battle conditions, similar to the way they were fought in The Subspace Emissary. These boss fighters are considered to be normal battles and are not counted under the possession puppet fighter battles also played in the game. There are no effects present during the fights, and all Mini-Bosses are villains within their home series.

Retrieved from "https://fantendo.fandom.com/wiki/The_Elemental_Labyrinth?oldid=3076688"
Community content is available under CC-BY-SA unless otherwise noted.