Fantendo - Game Ideas & More
Register
Don't have an account?
Sign In
Advertisement
in: Articles under Construction, Stubs, What is the New Fantendoverse?,
and 6 more 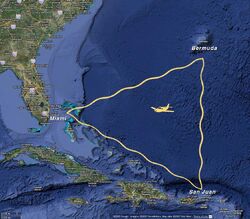 The Bermuda Triangle, also known as the Devil's Triangle, is a loosely defined region in the western part of the North Atlantic Ocean, where a number of aircraft and ships are said to have disappeared under mysterious circumstances. According to the US Navy, the triangle does not exist, and the name is not recognized by the US Board on Geographic Names.

In the Fantendoverse, it is a location of a unusually large amount of distortion mist, hiding several continents and islands. One isolated island is home to Magma Sentinels, while a continent is currently home to Amelia Earhart and the entire race of people that are her offspring. It is unknown the exact numbers of countries and continents are hiding under the Bermuda triangle. The triangle has seemingly developed a defense system of deadly storms and sea monsters that keep most outsiders away from the island. Vile beings, unknown to the real world, patrol the triangle in an attempt to strike down any sailors.

Across the island houses the rare ore Sentelenium, which is near impossible to find anywhere else. The Triangle is filled with exotic animals and creatures not found anywhere else. The Bermuda seems to mix fantasy with reality, with so many clashing places spread across it.

Eden is a continent within the Bermuda Triangle, home to Amelia Earhart and the rest of her offspring. The Earharts live in the Country of Airheart, which is also host to the Fountain of Youth and the temple surrounding that. The Earharts live in the temple and have lived for a long time thanks to the Fountain of Youth's effects, which they refuse to share with outsiders. The rest of the continent has not been explored.

During the Fantendo Now episode Bermuda Bermuda, Leah, Sakeena, X-Ray and PalmMan headed to Eden to find a rare flower and ended up clashing with the Earharts, barely escaping with said flower (and a cup of eternal youth water).

Ocoa is an island that mixes the modern age and age of piracy, filled to the brim with greedy pirates that battle on the daily to plunder loot. It's one of the most dangerous places in the Bermuda, with infamous pirates like Blackbeard (who survived from the Fountain of Youth), running amok the island. Across the coasts are hundreds of pirate coves.

Ceredigia is a continent in the triangle which is home to several species believed by the outside world to be extinct -- including dinosaurs. This continent also houses the kingdom of Aimlo, whose royal family seeks to promote a simpler economy influenced by medieval culture, eliminating the pressure of things like credit and debt. It is currently ruled by Princess Kalatia.

This isolated island is home to the rare ore Sentelenium and the Magma Sentinels. Not much is really known about them at the moment.