The Apprentice is The Enemy's mostly-loyal assistant, apprentice and his only friend. He is quite powerful, but not quite as powerful as The Enemy and The Fan themselves. (However, with his training from The Enemy, he has the potential for immense power and is currently building up to said power.) He is apparently Gnarled's best friend, as shown in The Apprentice Commeth. He is often rebellious, as shown in many of his major appearances, and, although mostly loyal to The Enemy, sometimes sides with the opposing team and often doesn't side with anyone at all.

In the reboot, The Apprentice is a minor character in some select games/fics, but a major one in Dimensional Darkness and the main character in Initiation.

Sometime between Fantendo Origins and Shattered, the Apprentice faced off Mr. ? and the two battled on a unknown location. Although both survived, they seemingly meant to want to kill each other.

During Fantendo Mosiac, the Apprentice was among some of the souls that were turned into zombie-like beings. Afterwords he parts words with Sixty Four, Gorge, and Teardrop Seaside concerning Ella Metals.

He is a playable character in this game, and he has changed a lot since we last saw him. No longer working for The Enemy but still residing in Darktendoverse, The Apprentice uses his training in the Power Chaotic to attack anyone in his way. 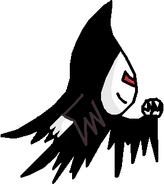 The Apprentice in Fantendo Smash Bros. Shattered.
Add a photo to this gallery
Retrieved from "https://fantendo.fandom.com/wiki/The_Apprentice?oldid=2260423"
Community content is available under CC-BY-SA unless otherwise noted.