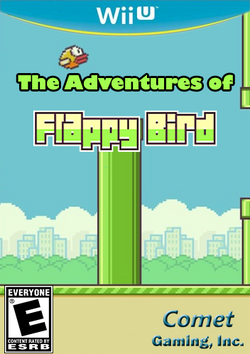 The Adventures of Flappy Bird is a new video game for the Future Nintendo, Wii U, and Nintendo 3DS, produced by Comet Gaming, Inc. It features the popular video gaming character Flappy Bird going on an adventure to stop Tappy Bird. The game is scheduled for release on February 28, 2014, in all regions.

After Tappy Bird and his empire plague the Flappyville Kingdom, King Flippy Bird cannot take it anymore. He sends a brave hero off on a quest to vanquish the evil villain, named Flappy Bird. Flappy Bird must fly through several Warp Pipes, avoiding several enemies sent by Tappy Bird along the war. After the hero reaches Tappy Bird, a showdown ensues, and the good side is victorious, as usual. Flappy Bird returns home.

As in the mobile version, players must fly through pipes to advance, but the levels are not infinite and end after twenty pipes. While the game is very easy in the first world, difficulty increases greatly.

The game is divided into five areas, each of which contain a total of six levels for a total of thirty levels.

The game's American boxart for the Wii U.
Add a photo to this gallery

The game was conceived on February 19, 2014, by Lumoshi, who announced it. The game was praised by many, with few negative reviews. A price was announced, which was $20 on the 3DS, and $30 on the Wii U and Future Nintendo.

After the game was banned, a sequel was announced titled The Adventures of Flappy Bird 2.

Retrieved from "https://fantendo.fandom.com/wiki/The_Adventures_of_Flappy_Bird?oldid=2513758"
Community content is available under CC-BY-SA unless otherwise noted.