Tharja is a character from the Fire Emblem series, first appearing in Fire Emblem: Awakening. She is uninterested in serving Plegia in the war against Ylisse and joins the Shepards. She is known for her personality, often bordering on creepy and obsessing over the arcane. She has a infatuation with the tactician Robin, which is hinted to continue to her descendants later on in Fire Emblem Fates in the form of Rhajat.

Tharja is a Dark Mage who hails from Plegia, though she does not care about the conflict between Plegia and Ylisse. After joining Chrom's army, she falls in love with the Avatar/Robin, regardless of the Avatar's gender. She has the darkest thoughts in the army. Her support with Nowi reveals that she has the power to read fortunes using a Manakete's scales, and can divine the location of anyone or anything using one. She is well versed with curses, ranging from a constant runny nose curse to a cooling hex to bring down fevers. She is the mother of Noire if married to another character via S-Link and a potential mother of Morgan if she marries Robin.

Tharja is first seen in Awakening as among the forces trying to stop Chrom and his army from rescuing Emmeryn in Chapter 9 at Plegia Castle. However, Tharja questions why she has to fight for what she perceives as a pointless reason. If Chrom speaks to Tharja, Chrom will ask her to join his cause since that is what his sister would do. Tharja, who is reluctant to fight in the first place, joins Chrom in fighting against the Plegian forces.

After the war, if Tharja is still single, Tharja's obsession with the Avatar leads her to a life of casting curses and hexes to reunite with them.

Tharja appears as the Mirage partner of Kiria Kurono, Tharja is classified as a "Dark Mage" Mirage. She transforms into a magic staff to aid Kiria in combat. She also uses her magic to aid Kiria in her daily life. Tharja is the creator of the Uta-loid Tiki software. It was conceived using her magic so that Tiki could draw Performa from those that use it in order to sustain her form.

Tharja appears as an unlockable character in Super Smash Bros.: Going for Gold. Her daughter, Noire, appears as her alternate costume.

Tharja appears as a playable character in Super Smash Bros. Assemble. She uses dark magic specials that don't wear down over time unlike Robin's attacks. She can be unlocked by clearing Classic Mode with Robin.

Tharja appears as an Mystery Mushroom costume, unlocked via going through the 100 Mario Challenge or using her amiibo.

Tharja appears as a playable character in Super Smash Bros. Discord, appearing as a starting character. Like Robin, she has limited-use tomes she uses for her specials, although she doesn't use a sword in her normal attacks, opting for short range harming hexes instead. She has Rhajat as an alternate costume, as well as her Winter's Envoy and Bridal Bloom costumes from Fire Emblem Heroes as alternates.

Tharja as she appears in Fire Emblem Awakening 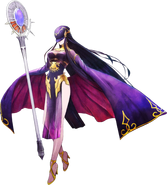 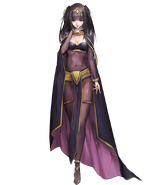 Tharja as she appears in Fire Emblem Heroes (Portrait) 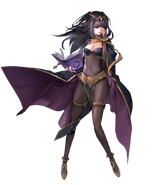 Tharja as she appears in Fire Emblem Heroes (Attack) 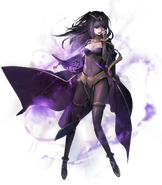 Tharja as she appears in Fire Emblem Heroes (Special Attack) 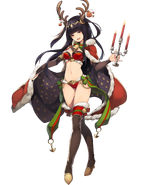 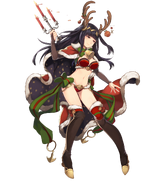 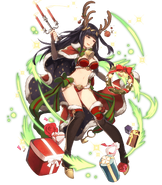 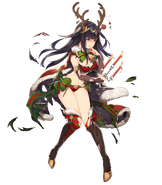 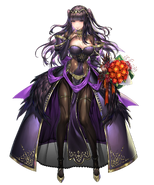 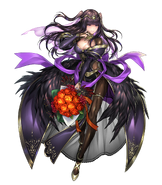 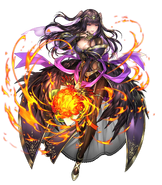 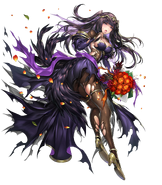 Tharja as she appears in Fire Emblem Warriors

Artwork of Tharja from Fire Emblem Cipher
Add a photo to this gallery
Retrieved from "https://fantendo.fandom.com/wiki/Tharja?oldid=3198693"
Community content is available under CC-BY-SA unless otherwise noted.