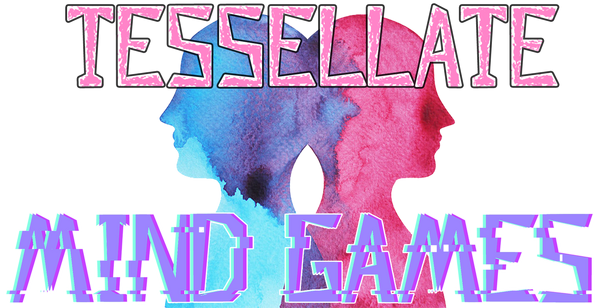 Tessellate: Mind Games is a role-playing action video game developed by Bleak Industries to be released worldwide on the Nintendo Switch console, sometime in 2017. It is the third main instalment in the Tessellate series, and takes place directly after the previous title, Tessellate: Bad Luck. The game is also stated to end the first trilogy in the timeline, as future titles will take place in a different setting and time period.

The main plot of the game, Broken Personality, takes place directly after the conclusion of Tessellate: Bad Luck. It focuses on Tess, as her personalities become harder and harder for her to control, which eventually leads to the discovery of an unknown source hunting them down individually, which forces Tess to take extreme action to save her other selves from a dead end.

Like with the other two titles in the series, Mind Games was rated a "T" rating by ESRB, and a "16" by PEGI, however, this is subject to change as the final version of the game has yet to be released. Similarly to the previous instalments, the release date has been simply expressed as 2017, however it seems a Winter 2017 release date is most likely for the game.

Mind Games was initially revealed and teased through a beta version of the logo at the Fantendo 10th Anniversary Showcase, confirming the third game in the series. The game was properly announced at the Fantendo Fanon Feature 2017 with half of the presentation dedicated to explaining the game. The idea behind changing the genre came around as Mind Games was planned to be a more serious game, with darker themes than previously explored. Therefore, the visual novel genre may have been a drawback for the game's events. It was later decided the game would be turned into an action RPG.

An aim of the game was to revert the attention of the series back onto Tess specifically, and her personas, as the previous games focused on her relationship with her daughter, Tiffany. Also, to expand on what already existed with her personas, as they hadn't been explored as a property before, with the main projects regarding them focusing on their individual journies as humans instead of the process of personas themselves.

Broken Personality is the name given to the story mode of Mind Games.

Due to the genre transition from Bad Luck to Mind Games, becoming a role-playing action title as opposed to the open world shooter scenario created in the former two titles, Mind Games has a newly developed engine. As a role-playing title, the main goal for the player is to defeat the given enemy by any means necessary, without dying in combat.

However, there are many factors which will determine the success rate of defeating enemies, beginning with the core eight combat-oriented stats that are improved upon throughout the course of the game through many different methods.

Stats can be increased through either levelling up, or through completing activities in your daily life to subsequently boost them.

All characters have a large move pool which develops as they level up. Naturally, they start with weaker moves and less effective moves which become stronger and more powerful as they are replaced with heavier hitting moves. Also, moves can be levelled up based on how much they are used, which will boost their effectiveness.

Each individual has a different stat differentiation which means that they will be more skilled in different areas, based on the characteristics and personalities of that character. It also helps to give the player a better insight to the character's play style, for example, Tess has a Melee Boost and a Magic drop, which reflects her as a stronger physical attacker. All characters also have a unique element aligned with them, which deals less or more damage to an enemy based on their strengths and weaknesses.

Every character in the game is also assigned an element based on their characteristics. Different enemies have weaknesses or strengths for these elements, giving them an attack boost or drop depending on the effectiveness of the move. It has yet to be confirmed if moves will have their own separate typings or not.

Items can be equipped to party members to strengthen them in different fields. Every character has a slot open for armour, a short-range weapon, a long-range weapon, and a mendallion which can increase their special stats like magic and luck. Weapons and Armour can be combined with other items in your arsenal to boost their effect, and make them more effective in battle. For example, you can combine pieces of metal with a sword to increase its power. You can also add items like Poison to a weapon to make a poisoned weapon, for example.

The Psychosis Meter is a gameplay mechanic which drastically changes the landscapes in the game, based on how full or empty it is. If the Psychosis meter is high, the landscape will become more trippy and psychedelic, and can make it harder to decide what's real and what's fake.

It can be harder to identify items in the world when the psychosis meter is high, and it can make you less likely to land attacks, but otherwise has no major effects on the overall game.

A Mind Blown occurs when a character has reached it's peak potential. They transform into a radical new appearance and gain a boost to all their stats. They also unlock a new devastating move which will have drastic effects on the battle.

Due to Selene's latest income, the player can choose to invest her money in whatever they desire. They can choose whether to research new weapons, new moves, or rebuild the city to gain more investments and added bonuses for the characters. For example, if you decide to rebuild Bude Corp, Selene's power in battle will increase by 20%, similarly for Tiffany with the Genetics Facility.

Enemy Units have their own classification, and their own powers and abilities.

The main game mode in Mind Games is the story mode, Broken Personality. In the story, you take turns playing as the respective characters in the interactive story which adapts as you play. Through the choices that are made over the course of the game by the player, the story builds and changes based on what you decide. Despite this, there is only one true ending which is the conclusive ending, however, there are several other endings to discover.

Mind Games also has an expansive online mode which is unlocked after you complete the game for the first time.

Here are all of the characters currently in Mind Games. You can click on a character's portrait to be taken to their respective page.

A newer version of the beta logo.