It is not known to evolve into or from any Pokémon.

Along with Cobalion, Virizion, and Keldeo, Terrakion is a member of the Swords of Justice.

Terrakion is a bovine, quadruped Pokémon. It has a black, rounded forehead adorned with two sharp brown horns that curve forward. Its face is beige with orange eyes and short snout. On top of its head are several short spikes. Down its back are two brown ridges that join just past its shoulders. There are two orange protrusions on its shoulders. The bands around its legs are the same color as its face, and it has black hooves underneath these bands. Its striped underside is also beige. It has a short, stubby tail.

Terrakion fought humans alongside the other Swords of Justice during a war with humans in order to protect Pokémon. It is strong enough to destroy a castle wall in one blow.

Terrakion appears to be based on the character of Porthos from the novel The Three Musketeers. Like Porthos, Terrakion is the heaviest, largest, and strongest member of the trio. It also has traits of big horn sheep and oxen. Like the other members of its trio, its nose resembles that of a sheep, goat, or other hoofed animal.

Terrakion is derived from terra (Latin for earth), or terracotta (a clay-based material, as well as its respective color), and possibly champion. 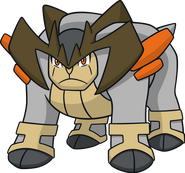 Add a photo to this gallery
Retrieved from "https://fantendo.fandom.com/wiki/Terrakion?oldid=3201719"
Community content is available under CC-BY-SA unless otherwise noted.