“Everyone must choose in which to believe, I can be an angel, but above all, I chose to follow the Darkness”
— Tenshi in Battle for Eternity

Tenshi (also known as Maskerade no Tenshi) is one of the characters who is part of Battle of Bracelets, although he just appears in the subseries Battle for Eternity. His first and currently only appearance is on Battle for Eternity as one of the Dark Bracelets, that means that he is one of the enemies. He is the nemesis of the Orange Golden Bracelet, Xander and the teacher of the current Dark Orange Bracelet, Alange. His main weapon is the Angel Sword, a light weapon that lets Tenshi attack fast and easily from the air with it. His main abilities are the Wing Form, that lets him create a pair of wings so that he can fly; and Time Stop, another ability that enables him to paralize the time for a short time. 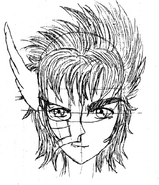 Sketch of Tenshi
Add a photo to this gallery
Retrieved from "https://fantendo.fandom.com/wiki/Tenshi?oldid=1100323"
Community content is available under CC-BY-SA unless otherwise noted.