Fantendo - Game Ideas & More
Register
Don't have an account?
Sign In
Advertisement
in: What is the New Fantendoverse?, Deities, Original Characters,
and 8 more

Tennu is a deity-like figure that first appeared in Chapter 10 of Fantendo - Genesis as part of Unten's vision while in cyro-sleep. In issue 7 and 8 of Xerra: The Last Beorn, He was part of Xerra's sickness induced vision, and she understood that his name was Tennu, although she had never met him before. It is unknown if Tennu is a made up figure or whether he actually exists, as his current appearances only have had him appear in visions.

Tennu is a very fascinating character in terms of lore, as his appearance suggests a huge, untold connection to Unten and perhaps the entire Beorn lore as a whole, yet he has yet to do anything except relay information to them. Tennu is a being that seems to exist out of time, as he is present during the far flung future presented in Xerra: The Last Beorn.

Tennu looks similar to Unten, but with a much bigger head that has four eyes and a skull like nose and a mouth that seems to be a bunch of tentacles and teeth that are connected with the rest of the skin. Two scars run across the left side of his face, similar to how Unten looked in Fantendo Smash Bros. Shattered.

Tennu also has four arms that have around 5 claw-like spikes on each one, with the exception of his cybernetic arm that looks similar to Unten's arm from Fantendo the Animated Series, except with the colors of his scarf in Tragedy (2015). He also has two feet with three claws that are constantly pressed against each other.

He also has blocks floating around him, with Exotoro confirming on chat that they were from Percivus.

Tennu appears in Chapter 10 as a vision Unten has, devouring the ship and melting into mush that turns into versions of Untens. It's implied that Tennu isn't just a dream Unten has, as this is how he learns about Earth's name and what The Fan and The Enemy look like.

When Xerra fell deathly ill in "Xerra Throws Up!", the seventh issue of volume 1, Xerra began to have a strange vision that had her land in a space that was entirely black, where she saw Tennu and "understood" his name. She entered through his mouth in the next issue, landing on a landscape made out screaming Beorn faces and found Unten there, killing him as she violently beat him up. As she saw Origin and Destiny, "understanding" their names and backgrounds like she had with Tennu, they declined her sacrifice of Unten and mouthed words she couldn't hear.

During Episode 6: Connector, Xerra falls ill once again and re-encounters Tennu while in a deep sleep. Although it attempts to fight against Xerra as she and Dream Boy explore inside him, Here it is explained that Tennu serves as a conduit for regenerating the general concept of Unten in the New Fantendoverse via The Seer- whether this is the real Seer or just a manifestation of them created by Tennu is unknown.

The Seer explains the concept of the Beorn triad is introduced here- Origin, Unten, and Xerra make up the first, linking, and last Beorns. Unten is spread across space (both multiverses and multiple times across the New Fantendoverse) and Xerra is spread across time (having crashed in the future a million years in the future across multiple timelines, which increases with each time the present changes).

Tennu's appearance without any effects applied to it.

Tennu with a blue warping background and a ghostly after-image. 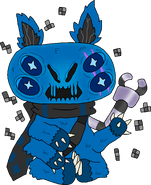 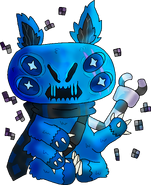