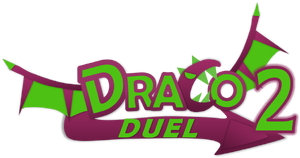 Draco Duel 2 is a fantasy-fighting game for the Nymbus, released on June 3rd 2020. The game is a sequel to the widely-popular Draco Duel that was released the previous year, being confirmed as being in development on May 30th 2019 in an official post by Button Studios, although it wasn't until the 2020 Fantendo Spring Showcase in March 2020 that details of the game began to surface. The game is the second in the Draco Duel series. Like its predecessor, Draco Duel 2 is a fighting game that takes place in the mythical setting of Arcania, a land where half-dragon, half-human creatures name Draconids roam the earth. Gameplay revolves around 4-minute matches between two players with the goal of fully depleting the opponent’s stocks and hit points. Draco Duel 2 introduces many new features to the gameplay, including new characters and skill trees, while adding new modes such as Tag Battle and Story Mode. (read more)