A Technocolor Mushroom is a item that when touched turns Mario in Technocolor Mario. In this form, Mario can go at very fast speeds and makes him become basically a black hole. Any enemies he kills charges up a meter that allows him to escape the game's limits.

The Technocolor Mushroom is constantly shaking, with colorful shadows peering out it's edges. It also has eyes, unlike the mushrooms in it's source material.

Appears in the version of Super Mario Bros and is a very heavily kept secret from the player. The player may not even know the power-up exists. In World 1-1, the player must sacrifice all their lives to the first Goomba and then start the game up again. They must now kill the first Goomba, which will explode into a shower of Marios. The Marios collapse the floor, putting Mario in World 1-2. Mario must then get towards the end of the level and then utilize the glitch that would send them to Minus World.

Using the Technocolor Mario amiibo, one can unlock the Technocolor Mushroom for their own use. It functions the same as it did in Nintendo 30 but no longer generates a portal to a secret boss fight and instead acts as an infinite star that lets nothing stand in it's way.

In this game, the Technocolor Mushroom allows Mario to destroy everything in its path (even level elements) and run incredibly quickly, but only for a little time. It's quite rare and it's normally hidden in the levels.

Returns as an amiibo-exclusive power-up like Super Mario Maker Phi. If used, any stars you collect will not count, as this is just for fun and speed-running through courses.

It is free to use so long as you do not try to take credit for any of the images or ideas behind this power-up. 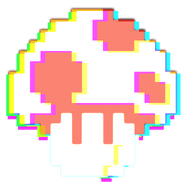 Appearance in Super Mario 3D Galaxy.
Add a photo to this gallery
Retrieved from "https://fantendo.fandom.com/wiki/Technocolor_Mushroom?oldid=3215103"
Community content is available under CC-BY-SA unless otherwise noted.