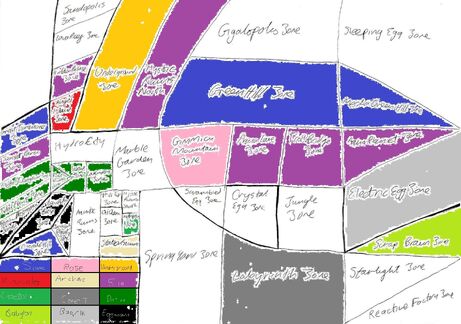 Team Badnik is a team in Sonic Heroes 2. It consists of Scratch, Grounder, Coconuts and Metal Sonic, and inhabits Electric Egg Zone. Its storyline features the team trying to vindicate Team Eggman; their actions are not always appreciated, however, such as when they piledrive copper tubing through Jungle Zone, causing supersidence.

Metal Sonic, having just been booted out of bed by the racket made by Team Rose, jolts up. With a headache like nails being hammered into him, he barges forward. In his haste, action stages Mecha Green Hill Zone and Aqua Planet Zone are blitzed.

Upon arrival, we zoom into Scratch, Grounder and Coconuts; we see them wake up and lament the noise (unbeknownst to them, coming from Scrap Brain Zone). After an extended mothers' meeting, they see Metal Sonic and we learn that all four are very angry about Eggman dropping them like lead balloons. After some time, Metal Sonic remembers that there is some stuff in Gigalopolis; he promptly goes. Action stage Aqua Planet Zone, begins; after this, we zoom back into Scratch, Grounder and Coconuts. Another cutscene kickstarts in which we learn that Eggman, in his wisdom, abandoned computer systems; upon use, we learn that there is another way out without treading water - Crystal Egg Zone. Scratch and Grounder send Coconuts out to investigate.

Here, Metal Sonic and Coconuts join each other. After establishing one another's justification for their presence, they return and they obtain their powerups. Immediately, they get to work; Coconuts levitates the earth while Metal Sonic pushes through the pipes. Once all has been fed, they travel through; we skip straight the way through. From here, zones Crystal Egg, Scrambled Egg and short zone Gimmick Mountain are played and then Team Rose and Team Dark bosses are played.

After this, the team escape. After much complaints about the savaging sunlight, They make their way to Launch Base Zone - action stages Marble Garden Zone, Casinopolis and Aquatic Ruin Zone are played. Here, the cutscenes slip together in an odd way; we see Team Eggman's Egg Carrier jet upwards in a similar style to its ascension in Sonic Adventure. Here, we meet Megatox; like the team, he is very angry about the amount of noise produced. Thinking it was Team Badnik who were responsible for the noise and a boss battle begins; this is followed by a pact where they make friends (they all dislike being booted out of bed). Megatox and Team Badnik make itself a deal; Team Badnik blows up the border between Launch Base and Chemical Plant Zone, and Megatox leaks into Launch Base and catches Team Eggman off-guard.

After fulfilling their part of the deal, their one objective is to scram; They decide to take a detour into Tidal Plant Zone. Upon arrival, they see Bean's handiwork and decide to play it; seeing no point, they decide to fly it home, to Electric Egg Zone.

The final part of the storyline shows Megatox meeting Team Eggman. We see a single boss fight, then Megatox rehibernating and then we segue back into Team Badnik. Here, we see the four of them go back into hibernation.

Retrieved from "https://fantendo.fandom.com/wiki/Team_Badnik?oldid=2857433"
Community content is available under CC-BY-SA unless otherwise noted.