Fantendo - Game Ideas & More
Register
Don't have an account?
Sign In
Advertisement
in: Free to use Characters, Characters, What is the New Fantendoverse?,
and 18 more

Tayshaun Fitzgerald is a human from Tempe, Arizona. He is a heroic being who protects the universe from dangerous forces without even knowing of the fact. He is one of two main protagonists in the Tayshaun & Amy series, alongside Amy Jackson. He protects Earth and a planet known as Midula regularly. People usually say that Tayshaun's style is unusual, what with his green hair, and "neon-like" outfit.

Tayshaun is a tall 19-year-old African-American male with green spiky hair. He wears an orange and purple Phoenix Suns hoodie (which just says PHX), shorts with a camouflage pattern and red sneakers. For unknown reasons, Tayshaun does not have an eye colour. In Fantendo Sports Resort, he will wear a Phoenix basketball jersey instead of his hoodie in his default outfit. As of The Cinema Trip, Tayshaun has a black goatee.

Born in Arizona, Tayshaun never had much to look forward to. Prior to meeting his now-fiancee Etinésa, he barely did anything aside from toughen himself up. He was raised in Phoenix, and is son of a former rally driver and a successful businesswoman, of whom was in charge of Fitzgerald Industries.

When Etinésa got kidnapped for the first time, Tayshaun was the first person on the job and his whole world flipped upside down. Suddenly, he went from a farmboy to a universally known hero of worlds. He defends the universe's balance non-stop, again, without meaning to, as well as Etinésa, who he also flirts with. Unbeknownst to Tayshaun, Etinésa found Tayshaun rather good-looking. The two eventually confessed their feelings to each other and have been together since.

Despite his deadly heroic life that he has no clue of somehow, Tayshaun manages to keep hold of a subtle, calm and collected home life. If he was seen out of the action, he'd be mistaken for a completely different guy. However, one day when teaming up with Hitomi, a portal to another dimension appeared to open.

Tayshaun and Hitomi, alongside Amy and Krystal, chose to see what the portal lead to, and found a completely different universe that confused them quite a bit. It apparently went by the name of Fantendoverse. He met Unten and Hitomi flipped, scared about Unten's ability to talk. After the not-so-good first impression, Tayshaun moved onward, getting ready to fight anything dangerous in the way.

Tayshaun will visit the Fantendoverse every so often. More recently, he's started realising he's saving the world, and has decided to go on the path to become a true hero of the universe, even if people have questioned who he is.

Tayshaun is usually lighthearted and talkative. He has no clue that many people worship him for his heroic skill and he is boggled whenever someone is approaching him with save-the-world tendencies. He is generally a joker aside from that. He is always firm with his opinions.

Tayshaun is highly athletic. He tends to use his athleticism to his advantage when he's traveling across Midula, searching for Etinésa and trying to end Santolio. He also has great strength and is always determined to get things done. He also shows great skill with a basketball, which he attributes to his athletic abilities.

Etinésa and Tayshaun are soon-to-be husband and wife. The two are very close and hardly ever fall out with each other or have arguments. They got engaged in How It Started.

DeMarcus is Tayshaun's best friend. The two are almost essentially twins, with the only things separating them being their hometown and their height (Tayshaun being 6'4", DeMarcus being 5'0")

Krystal and Tayshaun are good friends. They tend to joke around together and theyshare a lot of secrets with each other.

Tayshaun sees Amy as the sister he never had and finds her to be extremely caring and comforting. The two did not meet until the events of Amy vs The Future.

Alongside being an ally, Hitomi is a good friend of Tayshaun's. The two normally hang out with each other when they're in college and tend to mess around a lot as a team. In The Other Side, the two tend to share a lot of screen time together. The two are rather commonly mistaken for a couple because of how long they spend together.

Jess and Tayshaun get on fairly well. Tayshaun tends to find Jess' anger a bit off-putting but tries to overlook it when chatting to her.

Kenya is Tayshaun's mother. She is rather proud to have him as a son, what with what he does, and respects his choice to save the world. Kenya also has great respect for Amy and Etinésa.

Tayshaun is set to appear in RTA's Fantendo Smash Bros. game. His other moves are: 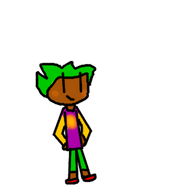 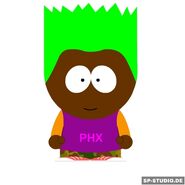 A South Park-esque art of Tayshaun. Created by Randomfrog (t∣b∣c) 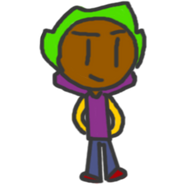 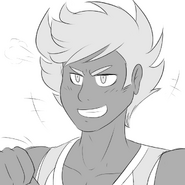 Tayshaun as he appears in Fantendo Smash Bros. Victory. Drawn by Exotoro.