View source
“I'm Tatanga, a Mysterious Spaceman. In 'Mario Land', I took over Sarasa Land and tried to take Princess Daisy as my queen, but Mario got in my way. This time I'm gonna do the same to him!”
— Perfect Edition of the Great Mario Character Encyclopedia

Tatanga (Japanese: タタンガ Tatanga), also known as Tatanga, the Mysterious Spaceman (Japanese: 宇宙怪人タタンガ Uchū kaijin Tatanga), is a recurring character in the Super Mario who first appeared as the main antagonist of Super Mario Land. In his debut title, Tatanga travels to Sarasaland and kidnaps Princess Daisy, planning to make her his queen after being hired by Wario to distract Mario so that he could take over his castle. After Mario defeats him, Tatanga reappears in Super Mario Land 2: 6 Golden Coins, piloting a much smaller and weaker spacecraft, to take his revenge on the plumber by working with Wario once more to halt his progress.

Tatanga is notable for being the first extraterrestrial character to appear within the Mario franchise.

Tatanga is a small impish creature, whose body is entirely purple in colour. Tatanga has large pointed ears, and tall eyes that contain small black pupils. His mouth is notably somewhat similar to that of a Goomba, as two noticeable fangs poke upwards from his bottom jaw. He is of short stature, being noticeably shorter than Mario.

Due to his simple appearance, Tatanga's rare appearances in other media tend to redesign the spaceman. In Valiant Comics' Game Boy comic, Tatanga's appearance is drastically different to that from the games, as he is a very tall, and much more humanoid, creature. This incarnation of Tatanga has facial features that resemble the original design's - though with the addition of dark eyebrows and a protruding snout - and wears a black jumpsuit with large grey spaulders and a red belt. In Kazuki Motoyama Super Mario manga eries, Tatanga more resembles his original appearance, though his ears are more bat-like in design. The manga's redesign also dresses Tatanga in regal clothing - he wears a ruff around his neck, a black cape, and a large belt with the letter T in its centre.

Tatanga is a player on the Bowser Villains team on the multi-player Wii sports game Mario Rugby League. He is a strong character, he has good strength and speed but poor skill. His special skill is to shoot foes with a laser beam for extended tackling.

“I am not interested in what Bowser would do! Tatanga does as he pleases!”
— Tatanga, Legend of the Chaos Star Part 13

Tatanga was first mentioned by Daisy in Part 6. While Daisy and Tiptron were attempting to warn the Koopa Troop about the dangers of the Chaos Star, and how they were all being manipulated by Dimentia and Dimention, their words fell on deaf ears. Shortly afterwards, a Koopatrol made a sarcastic remark about getting "visited by green men from space", to which Daisy angrily replied that aliens do exist, citing Tatanga as a prime example.

Towards the end of Part 12 and the beginning of Part 13, Tatanga ended up making an actual appearance shortly after Daisy, Tiptron, and Antasma (who was only lending his help to the latter two out of spite towards Bowser) arrived at Sarasaland after helping more captured Mushroom Castle prisoners. While there, Tatanga revealed that he was a mercenary, and was merely hired by someone to attack Sarasaland as a diversion to keep Mario busy.

Tatanga then went on to claim that he became so addicted to the rush of posing as an intergalactic dictator that he wanted to become one for real. He then decided that he was going to resume his original plans; not only to conquer Sarasaland, but the entire universe, as well. In order to test the new powers that Antasma has given her, Daisy decided to engage the extraterrestrial in battle. Before then, however, they made a deal which entailed that if Daisy won, then Tatanga would have to tell her who it was that hired him during the latter's first invasion. If Tatanga won, then Sarasaland would be his for the taking, and Daisy would have to become his bride in the process.

After agreeing to these terms, the battle began, with Daisy and Antasma emerging victorious in the end. Defeated and weakened, Tatanga revealed that Wario was the one who originally hired him to do what he did, much to Daisy's shock and anger. Shortly afterwards, Tatanga swore revenge, claiming that he would return again someday. From there, Tatanga and his troops promptly fled the scene.

Tatanga makes his only appearance in the Super Mario Revival series in episode 05 of the first season. He is one of the many villains revived by King Polarite. He is back and even stronger than before. He drains the Mushroom Kingdom of its life and resources, making the land very dry and arid, and there is plenty of famine. As the population decreases, the princess of flowers and nature might know how to put a stop to it.

A Cosmic Clone of him created by Khrysalis appears a major boss for the Thunder Star courses. He took over Sarasaland and kidnapped Daisy, although it's questionable as if to whether it was really a representation of Tatanga. His Cosmic Clone status is questionable, as he wasn't following the real Tatanga and he was able to talk and make his own actions.

Tatanga is the main antagonist of this game. He was hired by Wario to help him take over Sarasaland, but he got tired of following other people's orders and betrayed him. With the help of his new accomplice Aqualea, he hypnotized Bowser, King K. Rool, Wart, and their minions in hopes of being seen as a total threat to the world rather than a simple mercenary.

Tatanga appears as an antagonist in Ultra Mario Land. His only role in the game is to please "Dark Beast" with some sort of deal. In the end, Mario and Tatanga form a truce.

In Super Mario Blast, Tatanga once again appears as a boss in the last level of World 2.

It turned out that Tatanga doesn't fully trust Wario and simply joined him because Tatanga discovers that Wario had become stronger as the latter mastered the powerful but dangerous Rage Smash technique. Because of that, and the fact that none of his arsenal would be able to stop the anger-powered Wario, he joined him for safety reasons. It was also to have revenge on Mario for multiple of the failures caused by the pesky plumber.

Tatanga is shown to be able to shape shift between his small and short form to his more muscular build, and vice versa, which explains why Tatanga have a tendency to have either his small build or his large build after his debut. He uses his more muscular build, which form is named Strong Tatanga, to allow Tatanga taking a more direct combat and have notable strength in this form, but he is also less nimble unlike his smaller form.

Tatanga appears as a playable Warrior in Super Mario Warriors. Tatanga is armed with the Lightning-elemental Blaster to shoot down enemies with laser fire. He can also call in his space ship to perform special attacks.

Tatanga appears as the boss in the World 4 Castle, World 7 Tower, World 8 Tower, and the Final Castle. You must defeat him by throwing bombs at his spaceship after hitting Tatanga 6 times with bombs, his ship will explode and Tatanga falls off-screen.

Tatanga appears as the main antagonist of Mario & Luigi: Quartet Invasion, being responsible for the kidnapping of Princess Daisy in his attempt to activate the Four Relics of Sarasaland and use them to conquer the world.

Before the events of the game, Tatanga made an alliance with Kamella, who serves as his second-in-command. 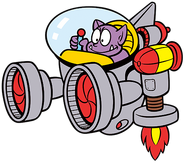 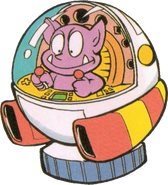 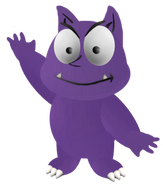 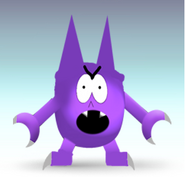 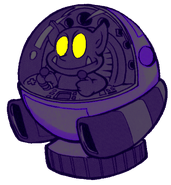 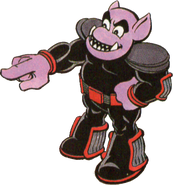 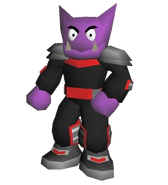 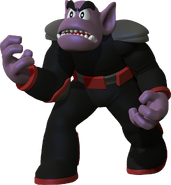 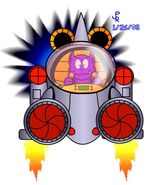