Tanoombas make a comeback after their last appearance in Mario & Luigi: Partners in Time as enemies. They're very common and appear more than regular Goombas in the world Jungle of Giants along with Mega Goombas. They're somewhat rare in other worlds.

Their form of attack in this game is similar to Tail Goombas, by swinging their tails when Mario is near.

Tanoombas reappear in the Mario & Luigi series, appearing in Mario & Luigi: Sage Quest. They are first encountered in Mount Grumbledome, where they are fought alongside either Bullies, Monty Moles, Stone Spikes and Rexes. Tanoombas attack by walking up to a character and sweep the floor with their tail, which needs to be countered with a Jump, can inflict Trip and has a fake-out, turning into a Thwomp with a raccoon tail to quickly crash downwards and crush a bro or an orange ball with a raccoon tail to slowly float downwards onto a bro (an attack they regain from Mario & Luigi: Partners in Time), both which can inflict Dizzy and need to be countered with a Hammer, or jump into the air and spin around, slowly descending into a bro to attack them, which needs to be countered with a Jump at the right time. In the overworld, they will disguise themselves as either a Toad with a raccoon tail, a ? Block with a leaf on top or a 100 Coin with their face on it, and when approached, they will spin around in an attempt to ram into Mario and Luigi, a combination of what they do in the overworld of Mario & Luigi: Superstar Saga and Mario & Luigi: Partners in Time. 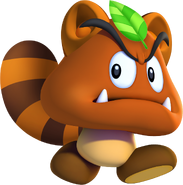