Tanooki Mario is one of Mario's Power-Ups that is obtainable in Super Mario Bros. 3 after Mario grabs the Tanooki Suit. Luigi instead wears a Kitsune Suit, though has the same abilities as Tanooki Mario.

Even foes (Goomba, Thwomp, etc) can be in a Tanooki form.

This unique suit allows Mario to fly, falling down slowly and the ability to whack things, all three with his tail, just like Raccoon Mario with the Super Leaf. The Tanooki Suit also adds the ability to turn into a statue and escape enemies for a limit of time before turning back into Tanooki Mario. When turning into a Statue in the air, it falls down and does similar like a Thwomp. In Super Mario 3D Land, Luigi's tanooki form is actually a kitsune version. His suit is honey-colored and resembles to a fox rather than a raccoon.

Kitsune Luigi appears as an unlockable alternate costume for Luigi in Mario Tennis: Heroes Vs Villains. By completing Luigi’s Kitsune Cup this costume will be unlocked and able to be played in almost any game mode.

Tanooki Peach (by TomPreston from DeviantART)

Tanooki Mario under the effects of a Starman or Rainbow Star 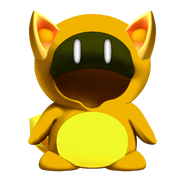 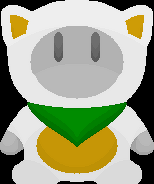 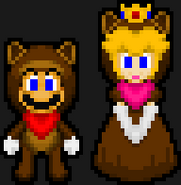 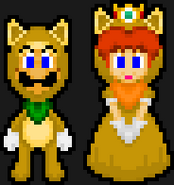