Start a Wiki
Takeo Yumi also known as Dream Boy is a character designed and mostly concepted from Exotoro. The character is a redesigned version of the original Dream Boy, which was a recolored Yoshi.

Dream Boy is a heavily distorted human with a purple body and hair like appendages that are directly connected to the rest of his body. He wears gloves and shoes to contain some of his dream abilities, although when opening up portals and using other dream abilities he no longer has these items on him. One of his eyes are usually wider than the other one.

Takeo Yumi was sucked into the Dream World, where eventually his body distorted beyond human and became Dream Boy. Keeping his powers contained inside gloves and shoes to prevent himself from releasing too much dream power, Dream Boy's body will distort further if he doesn't release some of it.

Dream Boy mostly keeps his powers contained inside of his gloves and boots, in fear of going completely out of control. He occasionally needs to release some energy that builds up inside, otherwise he will distort even further.

He can create portals and suck himself through them; he can also unleash purple blasts made of dream energy. As his body is mainly pulsing from dream energy, he basically is his own energy source. He is constantly afraid of blowing up. 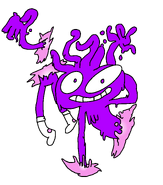 Takeo Yumi as he appears in Fantendo Smash Bros Victory

Unpainted variant
Add a photo to this gallery
Retrieved from "https://fantendo.fandom.com/wiki/Takeo_Yumi?oldid=3210953"
Community content is available under CC-BY-SA unless otherwise noted.