Takamaru was the hero of the 1986 Japan only game Nazo no Murasame Jo (The Mysterious Marasame Castle) however after that game he was never featured again until his character was revived by the Vined Inc. Captain N series first featureed in Captain N: The Game Master before returning in a larger role in Captain N: Outskirt Warriors. His most recent appearance is in the 2012 Wii U title Nintendo Land.

A samurai's apprentice Takamaru jumped to action when an alien invasion of the castle Marasame. He trained hard and was one of the most respected Samurais in all of Videoland however he soon faded into obscurity and the Master Hand moved him to the outskirts, which is where he was introduced in Captain N: Outskirt Warriors

After finding out about an escape route Takamaru along with his friend Little Mac became the leaders of a movement to escape from the outskirts and return to Videoland. They traversed across the land to try and escape however during the climactic final battle the army was defeated and Takamaru was the last of his senior ranking officials left behind.

As King Charles was banished to the outskirts by his enemy Mother Brain, Takamaru welcomed him into his army who he is now the sole leader of, with his former general Bubbles returning and Sukapon and Mike Jones being upgraded. Takamaru was hesitant of letting somebody else join into his army however knowing the power that the king of Videoland would have in returning him he agreed for him to join.

Takamaru remained just as loyal and faithful to his friends as before, and was the strongest of all the outskirt warriors, as seen in Captain N: The Game Master. He formed a deep friendship with King Charles who promised to knight him as a knight of Videoland when they return. 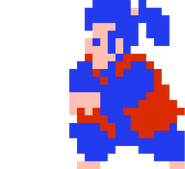 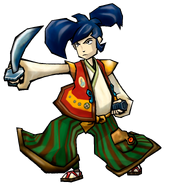 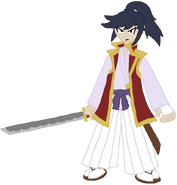