Tails Doll is a sinister puppet of Miles "Tails" Prower, which is often used as a Internet meme "Before you die, you see the Tails Doll". Some people believe that there is a curse in Sonic R that has to do with the Tails Doll.

The Tails Doll is confirmed to be a boss in The Nintendo Civil War.

Tails Doll will appear in Sonic Dash, but his role is unknown.

A Return to His Roots

Tails Doll will appear in Sonic R: Second Run, and will be racing on Eggman's side. He can been seen racing Tails and Shadow in Angel Island.

The Tails Doll is one of the thousands of characters to appear in this 2D action battle royale. His character is somewhat unconventional, playing as the normal Tails Doll regularly, being swift but only doing minimal damage. However, should one activate his ultimate technique he will be converted into his creepypasta incarnation. The doll becomes bloodied, and will periodically drip blood, leaving a small trail of tiny blood pools that can give away its position to those paying close attention, though it is only a hint since the blood will only drip every few seconds and he is still as swift as ever. The immediate area near the Tails Doll will darken, making it difficult for most characters to navigate (those with any form of night vision, blind characters, and Daikaiju will not have to worry however). The screen of anyone in the area of influence, Tails Doll included, will occasionally also experience temporary and random static distortion on their screen. The Tails Doll in this mode has a Rage Gauge, which he must keep filled by dealing damage or killing opponents to stay in his Creepypasta form. Damage dealt in this mode is significant and constantly drains HP at a steady rate, though only on direct contact. 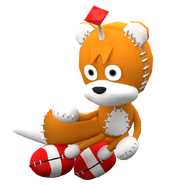 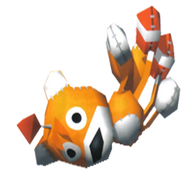 Add a photo to this gallery
Retrieved from "https://fantendo.fandom.com/wiki/Tails_Doll?oldid=3077890"
Community content is available under CC-BY-SA unless otherwise noted.