Taiketsu is a hyper boo with hyper powers, fire powers, and pizza powers.

With the power of Pizza, he an throw sausage or pineapple pizza at a face while playing a game. He also has his pizza power in Baka Adventures Kart.

He makes his debut in the Nintendo VR game Mariofan45: Attack of the Castle where he is trapped in a cage and MF45 has to save him from the evil Koopaling Lucas Koopa. Taiketsu can also be a playable character IF you rescue him from Lucas Koopa. 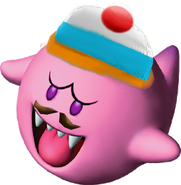 His new artwork
Add a photo to this gallery
Retrieved from "https://fantendo.fandom.com/wiki/Taiketsu?oldid=3236976"
Community content is available under CC-BY-SA unless otherwise noted.