“So... You had defeated my two acolytes. I am impressed that you come here so far but... I do not like when some jumping fishes like you get into the Legion's way. And for that... I will not let you out of here unharmed!”
— Tachi, Kirby: Story Break


Tachi (Japanese name is タチ, which simply means "us") is one of the three Draculock General Mages introduced in Kirby: Story Break as the tertiary antagonist in the game. She resides in the Story Break World, and serves as the leader of the three General Mages, although she is only high ranked and only follow orders.

Tachi is physically similar to the Jambastion Mages, however her robe is more pink than dark purple, and have orange lines and a croissant moon instead of hearts. Unlike the other two Draculock Mages, she also have orange stripes atop of her pink stripe of her beret, which signify her leadership among the trio. The emblem on the beret represent an alliance that is the Draculock Legion, and have brownish-orange hair, and the front are squared, with two large cottontails behind her head. She also have wavy orange eyelashes.

Tachi is a down-to-earth individual who focus on completing the objective instead of wasting time fighting with the intended enemies. In fact, she only fight her opponents if they proves as genuine threats or if they hurt her two acolytes or anyone at higher rank. This may backfire as she might be attacked against threats that seems to be weak but really aren't, as she might end up to be put into a severe disadvantage.

However, she does have limit on her temper, and do raise her tone if something or someone had managed to make her lose it. She also have high doubts on both lower ranks and higher ranks who lack genuine respect and loyalty, as is demonstrated by being grudgeful against Count Croakula, the second-in-command of the Draculock Legion, for his constant mistreatment to lower ranking minions and even called names about Teppurse when the latter wasn't around. If any betrayal was about to happened or had already happened, she will not hold back and attempt to capture or, if given permission by Teppurse, exterminate the traitor with all her might.

Tachi uses her katana called the Continent Katana that can slice even the hardest rocks, but is less effective against ices and other hard materials. She can also summon floating rocks as projectiles, and she is very swift with her katana strikes, making her difficult to dodge.

She also uses an Earthquake Driller that allows her to dig thorough the ground and hard materials that the Continent Katana cannot break, and when using it, it will cause large boulders to sprout out of the ground (even if it could not logically do so). It is also able to penetrate shielding of any kind, and is capable of hurting the Stone transformation, making it one of the very few attacks capable to do such. However, bombs and water attacks can make it short-circuit and stuns Tachi for a while.

Although her full role is unknown, she is confirmed to be appearing in this game, once as solo, another time with her two acolytes.

Tachi respect Kirby's abilities, but when they first met, she only dismissed him simply because of his cuteness (although she did see Meta Knight as a potential threat, but added that she doesn't have enough time) and focus on her mission, avoiding them as much as possible. Its only when Kirby had defeated Tomelle and Morgen that Tachi had to face him, although she only bears a small grudge against Kirby, since she knows that she could not let him attack her two acolytes.

Despite her leadership, she is shown to cares about her two acolytes and want the best of the two. In fact, she display hidden anger when confronting someone who attacked either Tomelle or Morgen (or both). She however tend to be quite annoyed by Tomelle's shyness and Morgen's flippant attitude. 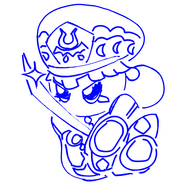 Retrieved from "https://fantendo.fandom.com/wiki/Tachi?oldid=2968405"
Community content is available under CC-BY-SA unless otherwise noted.