Tabuu is the main antagonist and final boss of the Subspace Emissary in Super Smash Bros. Brawl. He is a powerful, supernatural entity who resides in Subspace. With the help of the Subspace Army, he detonates Subspace Bombs to send entire locations into his dimension to absorb their power to increase his own. His name is a corruption if the word "taboo", meaning something strange or forbidden.

Outside of Brawl, he also appears in Super Smash Bros. Ultimate as a Spirit, where his Spirit Battle pits the player against a metal Bayonetta.

Tabuu is the main antagonist in the Subspace Emissary in Super Smash Bros. Brawl. His ultimate goal is to cut up the World of Trophies and bring it into Subspace. However, he himself cannot leave Subspace, as he is the embodiment of it. As such, he creates the Subspace Army to do his bidding.

Tabuu first took over the Isle of Ancients, home of the R.O.B. Squad, and forced them to work under him. Their leader, R.O.B., was against Tabuu and his plans, but after he brainwashed the rest of the R.O.B. Squad to do as he says, he eventually follows Tabuu, donning the title of the Ancient Minister. The Isle of Ancients is then converted into a factory to make Subspace Bombs, which are used to pull locations of the World of Trophies into Subspace. Tabuu then seizes and captures Mr. Game & Watch, who has an unlimited amount of Shadow Bugs within him. He begins extracting the Shadow Bugs from him and uses them to create the Subspace Army. Tabuu then used his Light Chains to take control of Master Hand, the master of the World of Trophies, and in turn used him to enlist Bowser, Wario, and Ganondorf. Giving the three of them Dark Cannons, they were sent to use them to turn any fighters they came across into Trophies, preventing them from stopping the Subspace Army.

Later on, Tabuu attacks and takes over the Battleship Halberd in order to have a flying base of operations for the Subspace Army. During this time, Meta Knight and King Dedede were having a fight. Meta Knight tried to fend off the Subspace Army, but was ultimately defeated and forced to retreat. King Dedede found out about Tabuu's plans and created a special badge that acted as a timer; after being placed on a Trophy, the fighter would be revived.

Towards the end of the story, Bowser and Ganondorf command the Subspace Gunship, a large aircraft with the power to pull the World of Trophies into Subspace much faster than Subspace Bombs. However, the fighters destroy it and head into Subspace themselves as Bowser and Ganondorf retreat into it. During this time, Ganondorf betrays Bowser and uses his Dark Cannon to turn him into a Trophy, planning to betray Master Hand and rule over the World of Trophies for himself. However, Tabuu is shown to have been controlling Matser Hand the whole time. Angry he was tricked, Ganondorf tries to attack, but is negated by Tabuu and turned into a Trophy himself. Master Hand himself then attacks, being freed from the Light Chains, but he is defeated as well. The rest of the fighters approach Tabuu, but now that he has reached his full power, Tabuu uses his Off Waves technique to turn all the fighters into Trophies. He the uses all the locations pulled into Subspace to create The Great Maze, a final trial the fighters must pass.

The badges King Dedede created end up saving Dedede, Luigi, Ness, and Kirby, who in turn free the rest of the Trophies. Bowser, Wario, and Ganondorf are also freed, and team up with the rest to stop the greater evil. After reaching the end of The Great Maze, Tabuu attempts to use the Off Waves again, but his wings are destroyed by Sonic. Now weakened, he tries to fight the fighters head on.

In his battle, Tabuu will randomly teleport around the arena, floating in midair and making it difficult for the fighters to attack him. He has a variety of attacks, from shooting a giant laser, to swinging chains of light, to throwing large shurikens that travel like boomerangs, to charging forward with a shark-like blade. He can also shoot rapidfire bullets from his hands and grow supermassive in size and fire lasers from his eyes. However, his most devastating attack by far is his Off Waves, which can essentially immediately KO any fighter caught in them.

Despite Tabuu's best efforts, the fighters' combined forces eventually defeat him. Subspace is then destroyed along with Tabuu and the Subspace Army, and the World of Trophies is fully restored.

In the Fighters of Lapis series, Tabuu acts as the main antagonist for the first, third, and sixth games. He makes a cameo appearance in the spin-off The Mysterious Five Project. More information can be found here.

Tabuu as he appeared in Super Smash Bros. Brawl. 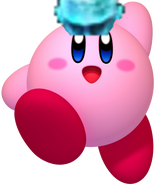 Add a photo to this gallery
Retrieved from "https://fantendo.fandom.com/wiki/Tabuu?oldid=3088865"
Community content is available under CC-BY-SA unless otherwise noted.