TaBooki: Growing Up is the first game in the TaBooki series. It features TaBooki, who starred previously in some Mario spin-offs, and his friends on a quest to defeat GherooB and restore peace to the land. The game is a RPG-based game for Nintendo 3DS and it's in development by Fantasy Factory.

It was a stormy day in Boo Village. A little Boo, who was left in an haunted mansion all alone, awoke. His name was Yvan. He didn't know all residents of the village, including his parents, were killed by GherooB, an evil Boo and the ruler of Dark World. His crown was filled with a diamond. If the diamond had enough power, GherooB could take over the Mushroom World. He only needed a special, powerful source of energy. Not knowing about any danger, Yvan awoke in the mansion. There was a huge thunderstorm. Yvan was scared, and he hid under a blanket. Suddenly, it started raining leafs. A big, shiny leaf fell in front of him. He decided to take a look at it. Just when he touched it, he got hit by thunder, causing a massive explosion of light. When Yvan awoke, he discovered his new appearance. He was brown, and had Tanooki ears and a tail. He had full Tanooki powers. Not knowing the shiny leaf was the source GherooB needed, Yvan decided to call himself TaBooki and started a quest in search for his parents. GherooB knew that now Yvan was the source, and he started the hunt on him.

TaBooki traveled through the forest. Suddenly, something felt out of a tree and landed on TaBooki. It was a wooden chest. Just when TaBooki came closer, it started talking: ''Hey pal, not so close!" . TaBooki now saw it was a living chest. It was called Chester. After introducing himself, he told TaBooki how he came here. He got captured by some moles and their leader, who had thrown him away, deep into the forest, and he landed into the tree. He then told him that he wanted to take them back, and decided to join his party. He explained his functions, which are holding items and sharing lots of useful information about places and creatures. He can also learn him useful battle techniques. The duo then set of on their quest.

After proceeding, they faced off against Big Bad Bubba, the giant mole king who captured Chester. After defeating it, a squirrel comes out of the bushes. He tells them they saved him from the Mole Tribe and that his name is Flynn. He is very thankful and tells a bit about himself. After that, he decided to join the crew on their adventure to do something back for them.

Near the end of the forest, GherooB was seen looking for something, just when the crew arrived. He was angry they made it so far, but also mentioned their adventure is over. After a tough battle, the crew defeated GherooB. GherooB was surprised. He used a diamond to disappear to an unknown place. The crew then takes the diamond, which he left.

Chapter 3: The Secret Part of the Woods

TaBooki and the crew wanted to go after GherooB, but didn't know where to go. It was a dead end. Just when they decided to look for an alternate route, the diamond started glowing. Suddenly, the ground started shaking and the crew fell on the ground. When they got up, they saw a path appearing out of nowhere. The diamond then stopped glowing and turned grey. The crew followed the path and they arrived at an undiscovered part of the forest, filled with lots of new creatures.

After walking around a bit, they met a pink bunny, named Bello. After a little chatting, a mad voice yelled Bello's name. All of them were startled. Bello's mom appeared, and she was really mad. She yelled at Bello he should've cleaned up the house, which he didn't. She then noticed the crew. She thought it was their fault Bello didn't clean up the house, because they were keeping asking questions to him. Chester mentioned they didn't, and that it wasn't their fault. Now mom got really mad, yelling at him he shouldn't have insulted her son. She then takes her frying pan and a battle starts. After the crew won, she admits her son is just lazy, and wondered if the crew can accept her apology. She then gave the crew her frying pan, as a sign of respect. She taught them how to use it and wished them good luck. The crew then sets of and continued their adventure.

The player can freely walk around in a world that is separated into different area's. They can proceed to the next area by completing puzzles or battles. The player can chat with other characters, which sometimes give useful information. When a player touches an enemy, a battle starts. Special Switch Spots are located in each world, where the player can switch heroes. Sometimes, a certain hero is needed to proceed.

When the player touches an enemy, an enemy battle starts. Being a RPG, the player and enemy attack in turns, each can have one attack at a time. All enemies have different attacks, which can be avoided by jumping or kicking at the right time, depending on the attack.

Each character has 4 attack types: jumping and kicking, and a Special Finish, a powerful attack unique to the character, which can be used after a special meter for this has been filled (this is based on how the player performs in a battle). After defeating Bello's Mom, the Frying Pan is also available, which can be used for a more powerful kick attack. Normal attacks can give 10 HP damage to the enemy, or if lucky, 30 HP.

Items can be found in hidden places like trees or bushes. Sometimes, NPCs give the player an item. Items can be used in battle for extra high damage to the enemy.

Items that can be used for more powerful attacks on the enemy. If not timed right, items will have lower HP damage.

Items that can be used to recover HP. If used, the player doesn't perform an attack in that turn. Health Items can be used both in and out of battle.

Worlds are the areas in which players can travel. A world includes many enemies, 2 mini bosses (mostly powered-up enemies) and a final boss. After the final boss of the world has been defeated, the player can proceed to the next world.

The heroes is a group of 3 playable characters. Each has an own battle system and different stats. While not in a battle, characters can be switched using Switch Spots.

Mini bosses are mid-bosses of worlds, and aren't always evil/working for GherooB. Each world has one, or sometimes two.

Super Bosses are the final bosses of a world. They are always evil and member of GherooB's troops. After defeating one, the player can proceed to the next world.

Enemies are evil creatures that can be defeated by the heroes although it isn't needed to proceed. In the overworld, enemies can suddenly attack the hero, starting a battle. However, if the hero jumps on the enemy in the overworld, it will receive damage before the battle starts. Each world usually has 4 kinds of enemies, and each enemy usually has 3 different attacks.

The supporting cast exists out of friendly characters that aren't playable. Some are very helpful, others are not.

TaBooki after winning a battle

Clawd
Add a photo to this gallery 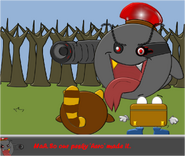 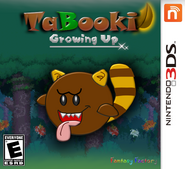 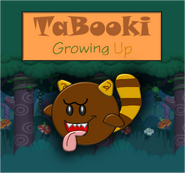 Beta Poster
Add a photo to this gallery 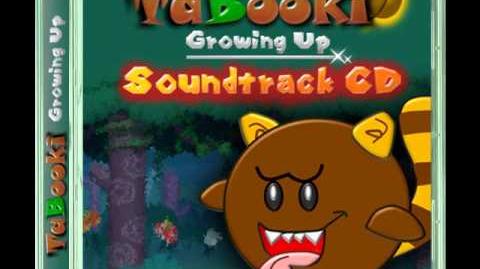 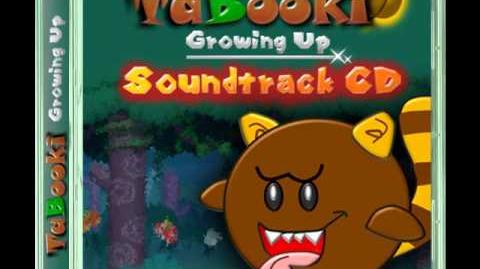 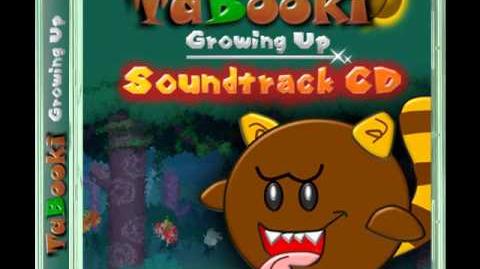 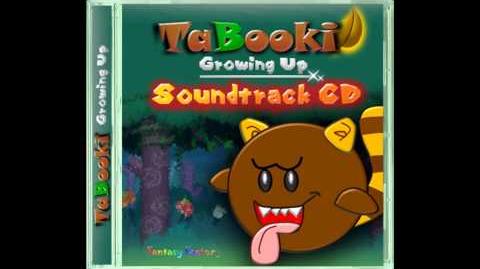 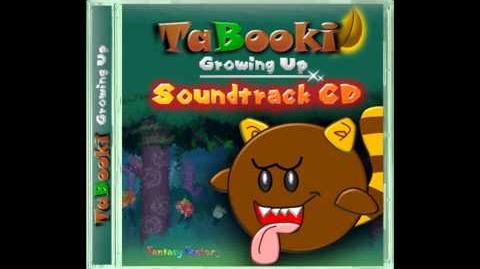 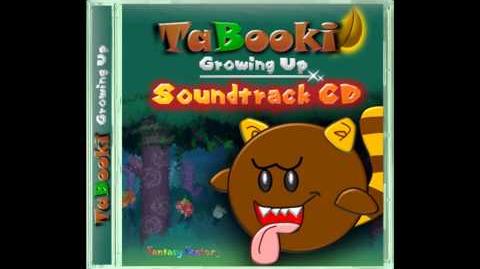 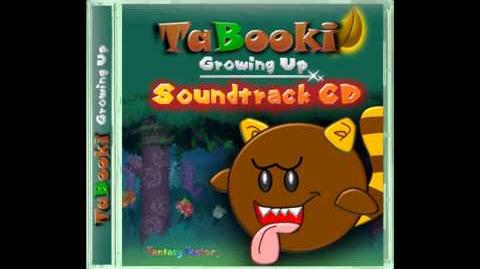 Retrieved from "https://fantendo.fandom.com/wiki/TaBooki:_Growing_Up/Original?oldid=1148861"
Community content is available under CC-BY-SA unless otherwise noted.