Yvan, better known as TaBooki (Tanusa in Japan), is a Boo with Tanooki powers. He is the star of his own series with the same name. He was created by Fantasy Factory to be a new character that would appear in some Mario spin-offs, but later gained his own series. In the series, he goes on various quests to defeat his archenemy, the evil GherooB and stop him from his evil plans. His first appearance was in Mario Kart: Pro Circuit, where he was a downloadable character alongside some others. After appearing in some other Mario spin-offs, the first game in the series, TaBooki: Growing Up was confirmed to be in development. It still is, and a second game has already been confirmed.

From the TaBooki: Growing Up manual:

It was a dark night in Boo Village when a dark shadow and his troops attacked the little town. They killed all villagers, in search of something. However, they soon gave up, and left just before the darkness of the night disappeared.

A little Boo awoke in the mansion. Everyone was gone. A huge storm was happening, and he got scared. The little Boo's name was Yvan. Yvan lived in this village with a group of Boos in peace for years, but it looks like that time has ended now...

Yvan hid under his blanket. Suddenly he heard a huge noise. The roof of the mansion broke off, and a part of the mansion collapsed. Suddenly, it started raining leafs. At the end of the large room, Yvan saw a larger and shiny leaf. When he came closer, it looked like it was made out of gold. Yvan tried to touch it, and slowly came closer. Just when he touched it, he got hit by the thunder. A massive, shiny and gold explosion happened.

Days passed, until Yvan finally awoke. He felt different. He felt stronger. He awoke next to the mansion, which was almost completely ruined. He decided to take a look to get some memories back. After walking around a bit, he saw himself through a mirror. He was shocked. He was chocolate-brown, but most of all, he had large ears and a huge tail. After some practice, he could spin around with his tail. He then went outside, starting a quest for the villagers, but most of all his parents. He called himself TaBooki, and went to the forest.

In a dark place, the evil mastermind behind all this, GherooB, an evil Boo who wants to take over the Mushroom World was watching him. He was angered, because the golden leaf that was now a part of TaBooki, was his source for ultimate power. He then commanded his troops to conquer the area, and he started a plan to kill our hero by himself...

TaBooki is a chocolate-brown Boo with brown Tanooki ears and a brown, striped tail. He has the same eyes and mouth as a Boo and is exactly shaped like one, but he's slightly larger than normal Boos.

Before he started his adventure, TaBooki was very quiet and shy. But after he learned how to take out foes, his self confidence grew and he became a hero. Now, he always wants to help, can be a bit mischievous, likes a prank, but is heroic and kind to others.

TaBooki appeared as a downloadable character in the game Mario Kart: Pro Circuit. He is a medium-weight with great acceleration.

TaBooki made his second appearance in Mario Baseball 3DS. Fans thought he was so cool in his debut they wanted to see more of him so he luckily got in the roster. He was a balanced player with Tanooki styled fielding ability, special pitch and swing.

TaBooki was going to appear as an unlockable character in Super Smash Bros. Duel, but was removed late in the game for unknown reasons.

TaBooki was planned to begin his adventure in Part 16 of Story Mode in the Tanooki Tree Meadow. He accompanies Mona in defeating an army of Yarn Waddle Dee's. They then go to a fortress and find Mr. Game and Watch. They investigate the fortress with him. They find Plusle and Minun chained and locked up. They enter the next room and find out that Hades has the key. They defeat him and return to free Plusle and Minun and discover that they are gone. But his place in story mode was replaced with Pokémon Trainer.

TaBooki finally got his own game, called TaBooki: Growing Up. In it, TaBooki is the only survivor of a huge disaster created by GherooB, which later becomes his archenemy. The game also reveals how he gained his tanooki powers, which he accidentally gained. Not knowing they were dead, he starts a quest in search for the villagers and meets new friends like Flynn and Theodor. He also meets TaBella, which later becomes his girlfriend.

In WarioWare: 3 Dimensions, TaBooki appears in a minigame of Tommy: TaBooki Tail Fighting. The player's weapon is TaBooki's tail.

In level 1: The player fights with a stationary Koopa-shell.

In level 2: The player fights with a walking Goomba.

In level 3: The player fights with a rolling Koopa-shell.

TaBooki is a duo with Lucoshi in Mario Tennis Smash. He is a Tricky Character and is downloadable in the 3DS version. His two moves are Thunder Tail and Tail Return.

TaBooki is a playable character who appears in Mario Kart Prima. This character is a light-weight driver and will be unlocked via QR mode.

TaBooki once again appears as a technical character in Mario Tennis: Ultra Slam. His default partner is TaBella.

TaBooki appears as a QR character in Mario Kart Ultra. His default partner is TaBella, and he is a lightweight racer.

According to the eShop description of Fantendo DLC, TaBooki enters in Demigod Tournament to defeat GherooB once and for all.

TaBooki appears as a playable character in the game, he uses his tail and Super Leafs to defeat the enemies.

In this game, TaBooki appears as Tom's creation and is an early character. He is the only character with the Tanooki element.

Interactions with Other Characters

TaBella is TaBooki's girlfriend. The two met each other in a dark forest. TaBooki and some of his friends were on a quest to defeat GherooB, when they saw TaBella. She was left in the forest. TaBooki and the crew saved her, and the two started to do romantic things. Eventually, they fell in love. The two also appeared as a duo in many sport games, like Mario Tennis 3DS.

GherooB is TaBooki's arch-enemy. He killed all inhabitans of his village to steal the diamond of ultimate power. When TaBooki accidentally became the source, GherooB started the hunt on him. Fortunately, TaBooki and his friends defeated GherooB, who swore revenge on TaBooki.

After TaBooki saved him from an army of moles, Flynn gladly joins him in his adventure. TaBooki, glad he finally has a good friend, started sharing a lot with him. The two are often seen making fun with eachother by playing sports or games.

TaBooki helped Theodor by convincing him he's a true hero, and from then, he accepted him as his friend. TaBooki admires him for joining although he was scared. He also thinks Theodor is very smart and he often learns things to TaBooki.

TaBooki was created by Fantasy Factory. He was meant to be a new character in the Mario series, but fans thought he deserved his own series. The first game is still in development, but Fantasy Factory confirmed they are planning to make it a whole new series. The creator first came up with the name 'TaBooki' while creating Mario Kart: Pro Circuit, and started to think of what a 'Raccoon Boo' really should look like. 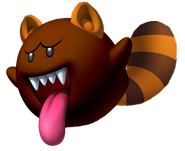 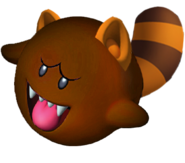 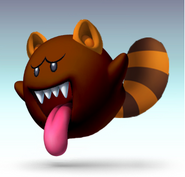 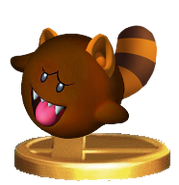 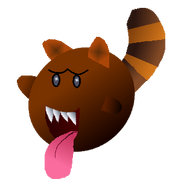 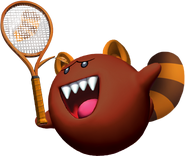 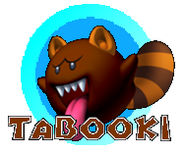 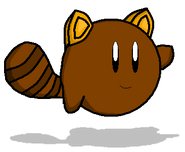 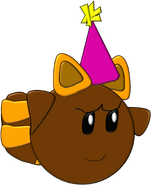 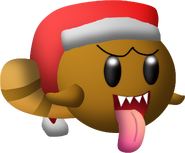 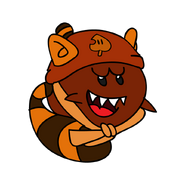 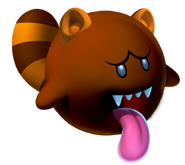 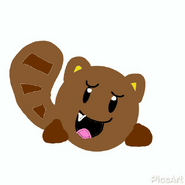 TaBooki's appearance in The Super Fantendo Show.
Add a photo to this gallery

Retrieved from "https://fantendo.fandom.com/wiki/TaBooki?oldid=2749994"
Community content is available under CC-BY-SA unless otherwise noted.