Start a Wiki
TaBella is the girlfriend of TaBooki. The two met each other in TaBooki: Growing Up, were she was left in the Forest of Illusion . Her history is unknown and quite mysterious. Nobody knows how she gained her Tanooki powers. Later in the game, it is revealed that she worked for GherooB because she was captured by him. Fortunately, she escaped, but got lost in the forest. TaBooki and the crew found her, and she joined TaBooki's party to defeat GherooB. Through the game, TaBooki and TaBella seem to have a crush on eachother, and became in love. Although TaBella had never seen TaBooki before in TaBooki: Growing Up, the two had appeared earlier as partners in Mario Tennis 3DS. This game was TaBella's debut.

TaBella is a lightbrown Boo. Like normal Boos, she has a pink tongue and canine teeth. She also has black eyelashes. The things that makes her different from normal Boos, are her Kitsune ears and tail.

TaBella's debut as a partner of TaBooki. TaBella is confirmed to be a tricky QR Character. The code will be revealed a couple of weeks after the release of the game. TaBella has great skill and technique, but doens't have much power.

TaBella has an important supporting role in TaBooki: Growing Up. After GherooB captured her, he forced her to work for him. After she escaped, she got lost in the Forest of Illusion. Fortunately, TaBooki and his crew found her. Later in the story, she felt in love with him.

TaBella appears as a playable character in Fantendo Nightmare. Nothing else is confirmed so far.

TaBella appears as a QR character in Mario Kart Ultra. Her default partner is TaBooki, and she is a lightweight racer.

Tabella appears yet again in Lets-a-go, Mario as a somewhat minor NPC in the Spooky Area. Here, she is the assistant of Lady Bow and Bootler. She requests that the player finds Tabooki (pet Terekuribo if Tabooki has been downloaded), and when he is found, the player earns a Giant Star Coin. 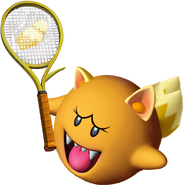 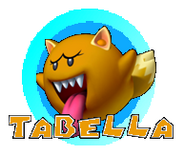 A more detailed version of Paper TaBella
Add a photo to this gallery
Retrieved from "https://fantendo.fandom.com/wiki/TaBella?oldid=2029621"
Community content is available under CC-BY-SA unless otherwise noted.