T-elos is a character from Xenosaga series, debuting on Xenosaga Episode III: Also sprach Zarathustra as a major antagonist.

In a public demonstration on CAT Testing Grounds on Fifth Jerusalem, T-elos was demonstrated by Roth Mantel. She successfully annihilated an entire swarm of Gnosis, impressing both Shion Uzuki and Allen Ridgeley. Allen notes that her reaction time and Hilbert Effect strength are 3 times greater than KOS-MOS's. Roth Mantel reveals that the S.O.C.E. has decided to dispose of KOS-MOS, in favor of pouring their resources into T-elos' development.

Later, Shion and Doctus become suspicious and theorize that Ormus is involved with T-elos' development, which would mean that the U-TIC Organization was also involved.

T-elos later appears on Rennes-le-Château with Roth Mantel, claiming she is here for the "thirteenth key". When chaos sees T-elos, he is able to sense Mary Magdalene from her presence. In T-elos' and KOS-MOS' first engagement, T-elos demonstrates that she is clearly more powerful than KOS-MOS. KOS-MOS states that T-elos output is 4.75 times her own. KOS-MOS only manages to connect with a single attack against T-elos. Meanwhile T-elos lands a number of staggering blows against KOS-MOS. It is clear from the start of the fight that T-elos clearly outclasses KOS-MOS. While KOS-MOS is able to outlast her own estimate against T-elos, she is defeated when struck by T-elos' close-range Phase Transfer Cannon. T-elos then uses her heel to crush KOS-MOS' chest, disabling her. The damage inflicted in the fight was such that KOS-MOS had to be completely rebuilt into her version four form order to function again.

On "Miltia", after the deaths of Suou and Aoi Uzuki, Kevin and T-elos appear in Aoi's hospital room at the Acute Neurosis Treatment Facility. When Jr. attempts to shoot Kevin (which wouldn't have worked anyway due to Kevin being undead), T-elos deflect Jr.'s bullets from Kevin. When Shion and KOS-MOS escape through a window, T-elos attempts to chase them, and sees E.S. Asher. T-elos almost fires U-TENERITAS at Asher, but Kevin orders T-elos to stop and return.

In the underground ruins of Michtam, T-elos finds KOS-MOS after Mary Magdalene awakens in KOS-MOS. T-elos claims KOS-MOS is not the vessel in which Mary is supposed to dwell, and asks KOS-MOS to surrender. T-elos proves able to easily overwhelm the other party members.

When Shion asks how T-elos is connected to "that woman", T-elos reveals she is the partner of the Messiah (Jesus) and that T-elos's body is Mary's body and inside KOS-MOS sleeps Mary's will. T-elos intended to complete her resurrection as the true Mary Magdalene using KOS-MOS and claims KOS-MOS is nothing more than a temporary vessel. T-elos reveals Kevin desires Mary Magdalene's resurrection the "convergence of dissipating will", and that Shion is the Maiden of Mary Magdalene.

After a battle in which T-elos is partially defeated, T-elos is eventually defeated by KOS-MOS following an exchange of Ether, via Phase Transfer Cannons. As T-elos lay defeated, she is embraced by KOS-MOS as the two resonate with one another. T-elos disseminates becoming one with KOS-MOS, thus allowing Mary to finally be resurrected in both body and spirit.

In Episode 35: Turnabout Ylisse, after being beaten by KOS-MOS' group, T-elos resonate with KOS-MOS at petition of the last one, resulting on the resurrection of Mary Magdalene's body and soul alike, allowing KOS-MOS and Fiora to unlock their Ultimate Multi-Attack. 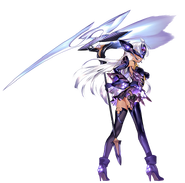